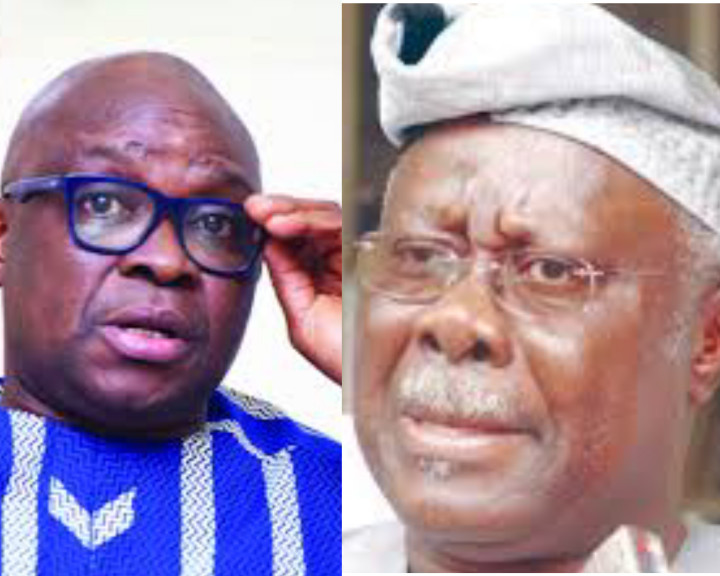 A statement credited to a former Ekiti State Governor, Ayodele Fayose, asking the Lagos State chapter of the party to retire a former Deputy National Chairman of the PDP, Chief Olabode George, may have caused divisions within the party in the state.

Two opposing statements were issued on Sunday by prominent executive members of the state PDP on the matter.

The former Ekiti State governor had said George should be retired to allow the younger ones to take charge of the party if they must begin to win elections in the state.

Reacting to this, the Publicity Secretary of the PDP in Lagos State, Gani Taofik, issued a statement on Sunday asking Fayose to keep his “divisive” advice.

He warned Fayose not to use his frustration to destroy the party, adding that the state PDP gave him seven days to retract the statement.

But the Chairman of the Lagos State PDP, Deji Doherty, disowned Taofik’s statement.

The PDP chairman emphasised that at no time did the State Working Committee meet to take such a decision and authorised such statement.

The Taofik’s statement read, “PDP, Lagos State chapter gives Fayose seven days ultimatum within which to retract and apologise for the deliberate unwarranted vituperation on all her elderly chieftains in the state chapter of the party.

“Fayose will be declared persona non grata in all our indoor and outdoor activities from Monday, 12th October 2020, unless he, Fayose, purges himself of the grave nuisance value arising from the unsolicited, rabid and divisive advice.

“We are nearing very important elections in the state to take us into winning Lagos State in 2023 general elections. We need togetherness and complementary efforts possible of the old, young, male, female.

“It is thus shocking that a supposed leader would come to our state to ‘tear’ us apart rather than give positive and progressively uniting advice to us. We will hold Fayose responsible for any future election loss in Lagos State and indeed the South-West.”

Doherty, however, said the state publicity secretary of the party must have made such a statement from a beer parlour because no responsible state chapter of the party, including the Lagos, could insult the person of Fayose, loved across board.

He said, “Governor Fayose’s presence at the inauguration of the PDP Campaign Committee for the Lagos-East Senatorial by-election was at the invitation of the party and as such we take responsibility for whatever he might have said.

“While we respect all leaders of the party, including Chief Bode George, we have no moral ground to make such a statement and therefore as a State Working Committee, we disown the reckless statement made by Mr Gani Taofik, who is publicly known as Chief Bode George’s political errand boy.

“Obviously, he must have spoken out of the emotional sentiment of his political affinity to Chief Bode George, not on behalf of the party.

“Apart from taking exception to the statement credited to us as a party, as the state chairman, I, on behalf of the State Working Committee, apologise profusely to the former governor.”