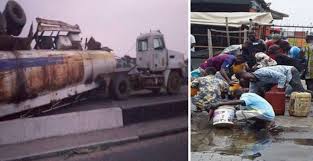 There was apprehension among concerned people in the Festac area of Lagos on Sunday when they spotted some residents scooping fuel dripping on the road from a fallen tanker.

The tanker laden with 33,000 litres of petrol was said to have overturned around the Festac Link Bridge while conveying the product to a filling station within the state.

Apparently oblivious of the danger, the residents were seen using buckets and kegs to scoop the fuel.

The Director-General, Lagos State Emergency Management Agency, Olufemi Oke-Osanyintolu, confirmed this, adding that the agency had to move fast to avert a disaster.

He said the trans-loading of the remaining petrol was ongoing, adding that emergency responders were on the ground to prevent a secondary incident.

He said, “The agency responded to distress calls around 6am and arrived to find an overturned tanker with its contents, 33,000 litres of petrol, rapidly spilling due to the effect of gravity on the overturned tanker.

“While immediate action by the joint team comprising the agency’s firefighters, Lagos Fire Service and the Nigeria Police was taken to prevent a secondary incident, the scene was invaded by people carrying kegs attempting to scoop the product. This required additional police support. Trans-loading of product is ongoing.

“We appeal for calm and will provide further updates.”

Related Topics:ExplosionFeaturedscooping fuel
Up Next