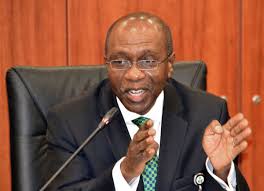 The Central Bank of Nigeria through its Monetary Policy Committee on Tuesday retained all monetary policy rates in a move expected to stimulate growth of the economy.

Specifically, CBN Governor, Mr Godwin Emefiele, who disclosed that the Monetary Policy Rate otherwise known as interest or lending rate was left at 11.5 per cent, explained that the decision was based on the need to speedily exit economic recession through price stability.

He spoke to journalists at the end of a two-day meeting of the Monetary Policy Committee (MPC), the last for 2020.

He also said the Cash Reserve Ratio (CRR) was retained at 27.5 per cent and the Liquidity Ratio at 30 per cent.

The MPR is the rate which the CBN lends to commercial banks and often determines the cost of funds.

Emefiele said the MPC was faced with options around whether to tighten the stance of policy to address rising price levels recognising its primary mandate of price stability; to ease to support output recovery; or to hold to allow existing policy initiatives to permeate the economy.

He said, “The committee noted that although the appropriate response to rising inflationary pressure would be to tighten the stance of policy in order to moderate upward pressure on prices, it nevertheless, felt that doing this would exert downward pressure on the recovery of output growth.

“The committee also felt that tightening would negate the bank’s desire to expand credit to the real sector at affordable terms, not only to boost production, but also to increase consumer spending. To the Committee, tightening was therefore not the appropriate response at this time.”

The Nigerian economy has slipped into its second recession in five years as the gross domestic product contracted for the second consecutive quarter, according to the latest report of the National Bureau of Statistics.

It stated that Nigeria’s GDP recorded a negative growth of 3.62 per cent in the third quarter of 2020. The country had earlier recorded a 6.10 per cent contraction in the second quarter.

This is the nation’s second recession since 2016 and the worst economic decline in almost four decades.

The economy has been battered by COVID-19, which caused a major decline in oil revenues with global economic activities stalled for months.

Related Topics:CBNEmefieleFeaturedinterest rate
Up Next

Fuel price: Labour leaders storm out of meeting with FG