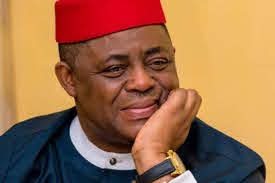 Former Aviation Minister, Femi Fani-Kayode may soon return to detention if the Federal High Court, Abuja grants the prayer of the Economic and Financial Crimes Commission, asking the court to revoke the bail granted him.

EFCC’s Lawyer, Mohammed Abubakar, asked Justice John Tsoho to grant his plea, saying that Fani-Kayode had continued to be absent in court for his trial lately.

Abubakar, who enjoined the court to issue a bench warrant on the defendant, also urged the court to summon his surety to show cause why the bail bond should not be forfeited.

The former minister was on November 10, 2016 admitted to N50 million bail bond with a surety in the like sum.

But the defence counsel, Mr Wale Balogun, urged the court to dismiss the EFCC’s oral application.

Related Topics:EFCCFemi Fani-Kayode
Up Next