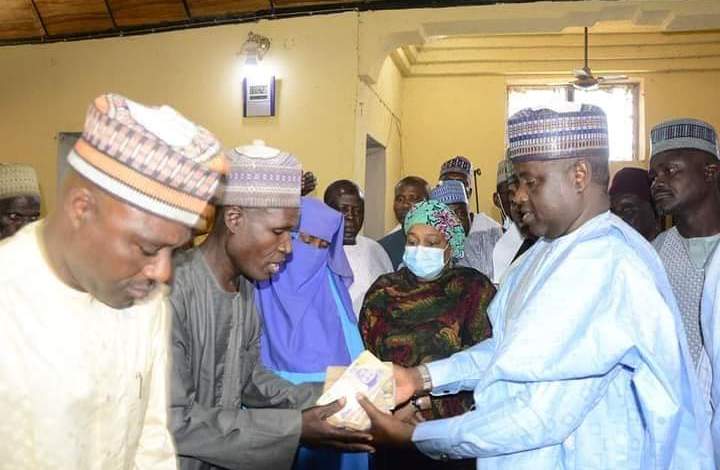 About 48 bereaved families of rice farmers killed in the Zabarmari area of Borno State last Saturday were on Thursday given a cash donation of N600,000 each and bags of food items.

The money and food items were handed over to the affected families by a committee set by Borno State Governor, Babagana Zulum.

The money was said to have been put together from the combined support of N20m donated by the Northern Governors Forum, and N5m by the North-East Development Commission, NEDC.

A committee, chaired by Borno State Commissioner for Youths and Sports, Saina Buba, made the cash donations and other food items to the victims at Zabarmari on Thursday.

Zabarmari is located at Jere, in the central part of Borno State.

They were donated by Federal Ministry of Humanitarian Affairs and Social Development for distribution to the families, the committee chairman, Buba, said.

He said each family should consider the N600,000 cash and food varieties not as compensation for the killing of their loved ones, but to reduce hardship resulting from gaps in access to livelihoods created by the death of their breadwinners.

Meanwhile, All Progressives Congress (APC) National Leader Asiwaju Bola Tinubu has commiserated with Governor Babagana Zulum and the people of Borno State over last Saturday’s killing of scores of farmers in Zabarmari community, Jere Local Government of the state by Boko Haram insurgents.

The former Lagos governor condemned the cold-blooded murder of innocent farmers toiling to eke out a living for themselves and their families and provide food security for our nation.

In a letter to the governor made available to reporters by his Media Office, Tinubu said, “It is with utmost sorrow and distress that I commiserate with you on the dastardly and inhuman killing of dozens of farmers in Zabarmari, Jere Local Government Area of Borno State, on Saturday 28th November 2020.

“The cold-blooded murder of these innocent citizens, toiling to eke out a living for themselves and their families and provide food security for our nation is not only callous but satanic.

“I recall your strident sacrifices to ensure that millions of displaced Borno residents are resettled in their ancestral homes and return to their various occupations. These efforts have not only helped in increasing agricultural output but have also given joy to the displaced.

“Your Excellency, this unfortunate incident despite your spirited efforts in complementing the efforts of the federal security forces is a sad reminder that the war against these desperate and blood-thirsty insurgents will require more efforts to win.

“My hope and prayer is that Allah will give you the courage to continue to provide succour to your people even in the face of this rather depressing event.”