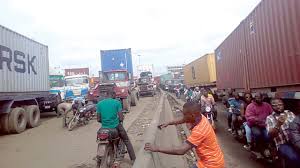 National Association of Road Transport Owners, NARTO, and Nigeria Union of Petroleum and Natural Gas Workers, NUPENG, may support the strike declared by the Maritime Workers Union of Nigeria billed to start Wednesday to protest takeover of Apapa-Oshodi Expressway by heavy duty trucks.

The gridlock has negatively impacted Apapa, making made life unbearable for residents of the area.

It has also crippled business activities in the area.

The MWUN had called a meeting weekend to sensitise stakeholders in the maritime sector to support the strike.

President General of MWUN, Prince Adeyanju Adewale, on Sunday said the union would decide its next line of action after the three days and government failed to fix the roads leading to the two ports and the area and address the accompanying traffic bottleneck.

He added that the strike ought to have taken place before now but noted that it was suspended because of appeals by the government.

However, the Federal Government has appealed to the union not to embark on the strike, saying work on the expressway is delayed by COVID-19 and #EndSARS protests which took place nationwide recently.

“Since the information became public, many of them have been calling and begging for time. They insisted that they are not against our action because the seemingly intractable gridlock is also affecting them and that they are indeed in total support of our planned action.

“But they said it is too sudden and pleaded that we give them time to prepare. So, we have decided to give them two days to prepare. Consequently, the warning strike will now start on Wednesday, December 9, instead of tomorrow (today) as earlier resolved.”

Leaders of the union, while giving reasons the members would withdraw their services nationwide and embark on three-day industrial action, said they were disenchanted by the deplorable state of the access roads to the Apapa and Tin Can Island ports which had claimed several lives and caused incalculable man-hour losses, among other dangers as a result of unending gridlock.

The three-day warning strike is one of the resolutions of the union’s National Executive Council, NEC, meeting held in Lagos.