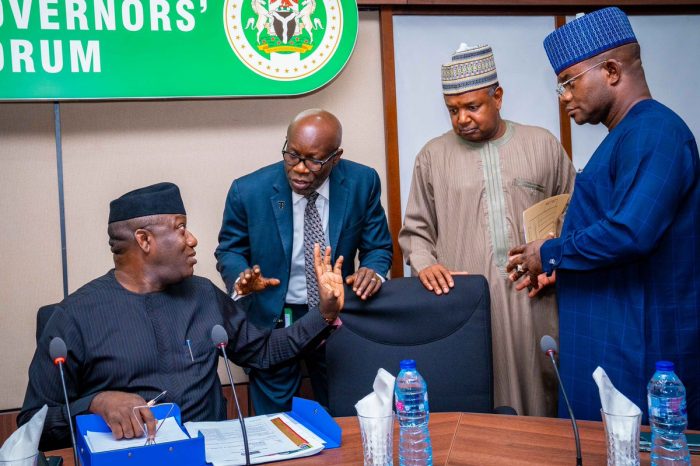 Governors of the 36 states of the federation say they have resolved to stop giving the job of collecting taxes to consultants.

They noted that the huge commission being paid out to such contractors would increase the states’ internally generated revenues.

Chairman of Nigeria Governors’ Forum (NGF), Dr Kayode Fayemi, who is also the governor of Ekiti State, said on Monday that this was part of the planned review of the policy on revenue collection by states.

The reform, he added, was being considered to boost the financial outlook at the sub-national level.

Fayemi, at the sixth Internally Generated Revenue (IGR) National Peer Learning Event in Abuja, also listed other reforms being planned by the states.

He said, “Other reforms being implemented by state governments under the SFTAS programme and as detailed in the “COVID-19 Response for Tax Authorities” issued by the NGF secretariat and endorsed by us at the forum earlier this year include: ending the contracting-out of tax collections and assessments.”

Another resolve of the governors, according to him, is to increase collaboration among the internal revenue service, ministries, departments and agencies (MDAs), and local governments; roll-out of tax-for-service initiatives; scale-up of cashless payments; and the deployment of a Geographic Information System (GIS) to support effective land administration and property taxes.

This year, he added, had presented the states with a perfect storm of difficulties to deal with, from a health pandemic to the second economic recession in five years.

He explained that at the wake of the COVID-19 pandemic, the forum worked with the Federal Government, international partners and the private sector to deliver the necessary response needed to contain the virus and ease out its impact on the lives of the citizens.

These, he said, included the set-up of intervention funds, roll-out of social investment programmes, distribution of palliatives, initiation of tax incentive programmes to protect and support livelihoods and businesses.

“Unfortunately, the decline in oil prices that followed the global lockdown and the social unrest, which echoed the demands of the #EndSARS protests, further worsened the country’s economic and social conditions for months. This exacerbated the already vulnerable fiscal environment for governments at both the national and sub-national level.

Fayemi said the governors worked together to reflate the economy.

The 2020 half-year year-on-year IGR performance, he said, reported a negative growth of 11.7 per cent for the 36 states and the Federal Capital Territory (FCT).

He said despite the overall decline, some states recorded positive growth, adding that three states in this category are Ebonyi, Gombe and Yobe, which recorded more than 50 per cent in growth.

Related Topics:IGRtax collection consultants
Up Next

No going back on deregulation of petrol price – FG