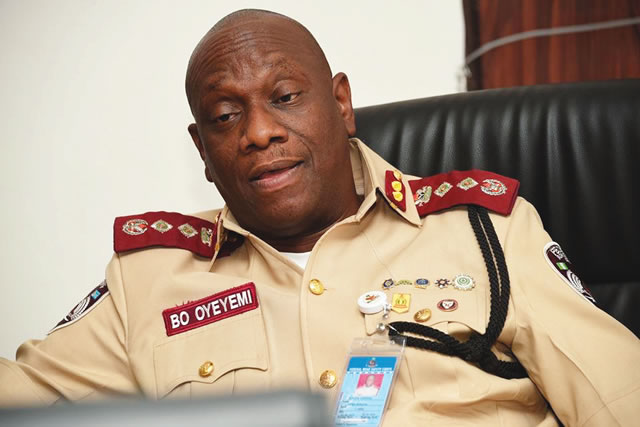 Corps Marshal, Federal Road Safety Corps (FRSC), Dr Boboye Oyeyemi, has ordered the immediate deployment of 36,000 special marshals and other logistics nationwide to ensure safety on the roads during the end of the year movements.
He also stressed the need to enforce compliance with established road traffic rules, COVID-19 precautionary measure for commuters, and free flow of traffic on major roads throughout the special patrol operation.
A statement by the Corps Public Education Officer, Bisi Kazeem, said the Corps Marshal also ordered strategic 24 hours observatory at commands along high volume of traffic/gridlock prone areas.
He directed the establishment of 11 traffic control camps, full mobilization of 23 help areas, full mobilization of 46 emergency ambulance (Zebra) points, full mobilization of road side clinics, and 24/7 broadcast on National Traffic Radio 107.1 FM.
He said the directive was targeted at achieving a near zero road traffic crash throughout the period, adding that the 2020 Operation Zero Tolerance commenced from Monday, December 12, 2020, which would end on Monday, January 15, 2021 nationwide.
Kazeem said the operation had been programmed to run in shift as follows 0600hrs – 1400hrs, 1400HRS – 2000hrs, 2000hrs – 2200hrs, with night rescue teams on stand by at all operational commands and billed to cover the following critical corridors: Sokoto-Tambuwal-Jega-Birnin Kebbi corridor, Katsina-Kano-Wudil-Dutse-Azare-Potiskum corridor, Kaduna-Saminaka-Jos corridor, Abuja-Kaduna-Kano corridor, Okene-Ogori-Isua-Owo corridor, Makurdi-Otukpo-Obollo Afor-9th Mile corridor, Asaba-Abraka-Ughelli-Warri corridor, Ibadan-Ogere-Sagamu corridor, Sagamu-Mowe-Lagos corridor, amongst others.
He explained that the Corps had observed that key characteristics of the period over the years were an upsurge in traffic volume and impatience by motorists who might not have adequately planned their journeys, or motorists managing mechanically-deficient vehicles to and from their travel destinations.
According to him, the foregoing is known to be the major causes of chaos and indiscipline among all classes of road users, leading to crashes, fatalities, maiming of motorists and loss of property as well as traffic congestion/gridlocks.

He stated that the operation would cover the three broad areas of traffic control/decongestion, public enlightenment, and enforcement, stressing that the enforcement was aimed at checking excessive speeding, dangerous driving/overtaking, lane indiscipline/route violation, road obstructions, use of phone while driving, overloading violation, seat belt/child restraint use violations and passengers’ manifest violations.

While officers and marshals will be mobilised with the necessary materials for Rescue Operations, the corps’ operatives will be collaborating with military units, the Nigeria Police Force (NPF), Nigeria Security and Civil Defence Corps (NSCDC), Directorate of State Services (DSS), NGO Ambulance Service Providers, National Network on Emergency Road Services (NNERS) and the Federal Roads Maintenance Agency (FERMA).
The corps marshal also stated that the operatives would be charged with the responsibility of identifying alternative routes to assist motorists during gridlocks, and give notification of traffic distressed areas for intervention.
He called on the motoring public to utilise all the FRSC social media handles (facebook.com//frscnigeria,Instagram.com//frscnigeria, twitter.com//frscnigeria, for necessary updates and in case of emergency, call the 122 toll free number and the National Traffic Radio live lines.
Related Topics:Dr Boboye OyeyemiFeaturedfrsc
Up Next

Three policemen, five others killed in attack on Zamfara emir