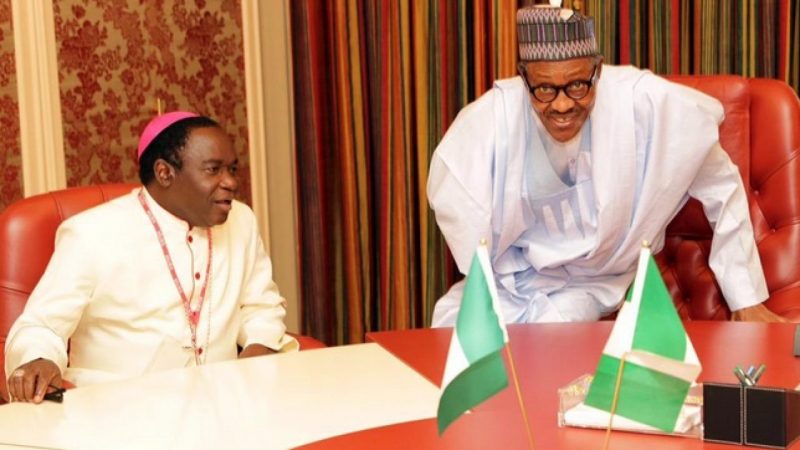 Bishop of Sokoto Catholic Diocese, Matthew Kukah, says he did not call for a coup in his criticism of President Muhammadu Buhari.

The priest said he only expressed his personal view “based on evidence”.

While accusing Buhari of nepotism in his Christmas message on Friday, Kukah had said there could have been a coup if a non-northern Muslim commander-in-chief does a fraction of what Buhari had done.

The Arewa Youth Consultative Forum (AYCF) has called for the prosecution of Kukah for allegedly demanding a coup, describing the bishop’s comments as “treasonable”.

But speaking with reporters on Monday night, Kukah said it was unfair for anyone to report that he called for a coup.

“The loss of lives in the last ten years, even before the advent of this administration, calls for concern,” he said.

“The reactions are a reflection of every citizen that makes up Nigeria. It is sad that when you drop something in Nigeria, everybody goes back to their enclave and abandons the larger picture. I am someone who never takes offence to what people say about me.

“What I said was my opinion based on evidence and what has happened in Nigeria, and if you looked into the records, there is evidence that justifies that statement, and if anyone thinks I am wrong, they should come out with a superior position.

“It is unfair for a journalist or news medium to report that I called for a coup while expressing my personal view about Nigeria.”

The cleric also responded to calls by some people asking him to drop his priesthood cassock and join the political fray, saying if he was to join politics, it would have been during the time of late Aminu Kano and not now.

The Catholic priest added that he had no plans to indulge in partisan politics.

“Take, for instance, brilliant Nigerian youths making comments about Chelsea or Arsenal and have never been to England. Does that make them players of such club sides?

“So, why will someone think because Bishop Kukah is speaking, therefore he is a politician? People who make this argument are totally ignorant of elementary politics and ignorant of the role of a priest.

“The truth is that a lot of us have not seen a priest saying what I am saying. The truth of the matter is, we are all in politics, but party politics for me, no. I am not a member of any political party and I cannot be. If it comes to voting, I do my right.

“Whatever I said can please or displease anyone, but that is my own opinion and doesn’t stop others from saying their own opinion. If you think my motive is wrong, say yours.”