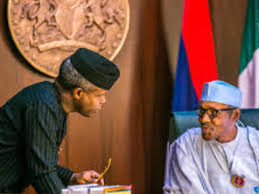 Vice-President Yemi Osinbajo (SAN) will emerge president of Nigeria this year, according to the Founder of Prophetic Hill Chapel of Ghana, Prophet Nigel Gaisie.

The cleric made another shocking prediction of the eventual outcome of the Ghanaian presidential poll conducted last year, which was won by the incumbent, Nana Akufo-Addo.

He said, Akofo-Addo’s challenger and former president, John Mahama would triumph (maybe in court) and become the new president.

The predictions were reportedly delivered by the preacher during the crossover service into 2021 on Thursday.

“Nigeria’s Vice President Yemi Osinbajo will become president,” Gaisie declared, without giving any further detail how this could happen.

The next general election will come up in 2023 not 2021 and Vice-President Osinbajo has not indicated any interest in contesting for the election.

Some pastors have also made some predictions for the current year but not said anything close to Osinbajo becoming Nigeria’s president.

For instance, Primate Elijah Ayodele of the INRI Evangelical Spiritual Church only said a northerner would still emerge as the nation’s next president in 2023.

Like Pastor Enoch Adeboye of the Redeemed Christian Church of God, what Primate Ayodele only said about 2021 was about the ravaging coronavirus and the effects of the vaccines being developed to contain it, nothung about presidency or the seat of power (Aso Rock).

Only the Catholic priest and Spiritual Director of Adoration Ministries, Enugu, Nigeria (AMEN), Rev Fr Ejike Mbaka, hinted at a possible end to the Muhammadu Buhari administration when he predicted that protesting youths might again move against the regime should it fail to improve Nigerians’ living conditions.

He said in his new year prophesy, “The Holy Spirit of God asked me to warn the government of the day to be very careful; to change policies and take care of the youths without politicising their (youths’) condition.

“That the government should rise and urgently create jobs and innovate opportunities that would benefit the youths of the nation because they have suffered so much.

“Don’t politicise the condition of the youths, otherwise, they will arise and end the political system.

Mbaka, however, did not specify when the youth agitation would take place.

He said, “I can see a year ahead; it is not specific whether it is in 2021 that this will happen, but it is within a time in the time of life, that the anger of God will befall many people in the political circle because they have looted so much and disgraced this nation enough.

“Those who should be serving the country have looted the country dry for their personal aggrandizement, such that our children and grandchildren no longer have a future.”

Meanwhile, Gaisie also said though the world would enjoy peace, he predicted that a terrorist attack would again take place in the United States of America.

“The world will enjoy peace, but America will have a terrorist attack,” he said.

On the outcome of the presidential election in Ghana, Gaisie said John Mahama would “sit in the office of the President”.