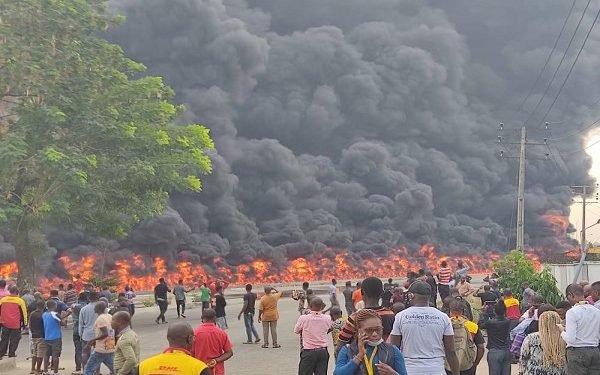 The Federal Government is set to establish fire stations in all the 109 senatorial districts in the country, Controller General (CG), Federal Fire Service (FFS), Mr Ibrahim Liman, has said.

He stated this during a press conference on Tuesday, in Abuja, adding that the country lost properties worth N32.12 billion to fire incidents in 2020.

According to him, a technical group to assess oil tank farm safety and management has also been established, with a view to mitigate disasters arising from oil tank farm explosions, especially in the South -West and South-South.

Public and government buildings recorded 543 incidents, while private dwellings recorded 1,382 fire incidents during the period under review, he added.

He said, “Some other affected areas were educational establishments, shops, hotels, event centres and others.

“About 574 fire incidents were caused by faulty electrical equipment, 246 by power surges, 51 by candles, 181 by cigarette stubs and bush fires, 404 by accident and arson, as well as several other causes.”

He further disclosed that the agency planned to purchase additional 89 fire fighting trucks made up of 44 water tenders, 15 ambulances, 15 water tankers and 15 rapid intervention vehicles.

He said, “We discovered that it is necessary to extend our operations from the state headquarters to the Senatorial Districts, so that we can be closer to the people, because the closer we are, the better our response time.

“The moment we start taking delivery of these vehicles, we will now identify some Senatorial Districts that are more prone to disasters and then we will deploy our men and trucks. But we will pick them state by state.

“We must touch every state. The first number of trucks is 44 and we have 36 states. So, we will identify one from each of the states and send the vehicle there. When the next batch of trucks comes, we will continue with the plan until we are able to cover the 109 Senatorial Districts in the country.”

He said the agency in 2020 inaugurated and deployed 36 state-of-the-art fire fighting trucks across the six geo-political zones to complement the operations of State Fire Services and reduce response time to fire and other related emergencies.

He said the service also collaborated with the Federal Ministry of Environment to train 750 personnel on COVID-19 response strategies and participated in decontamination and disinfection of government offices, schools, markets, streets, churches, mosques and recreation centres across the country.

Other achievements, he added, were the “establishment of eight National Fire Data Repository Centres (NPDRC) across the six geo-political zones of the country to enhance speedy response to emergency calls.

He also cited the “deployment of fire fighter’s tunic worth N6.5m to Bauchi and Kebbi state governments; and synergizing with the Ministry of Communication and Digital Economy to improve and integrate the Service communication with 112 (emergency toll number).”

Liman, who lamented the continued attacks on firefighters by mobs at fire scenes, said the service had concluded arrangement with the Police and the Nigeria Security and Civil Defence Corps (NSCDC ) to provide armed personnel to secure scenes of fire incidents, for unhindered operation of fire fighters.

He said, “In most cases, our men are attacked when they respond to fire outbreak or other emergencies. We have records of this from the Nyanya (FCT) axis. We have stopped our men from responding to fire calls from that area until the community leaders are able to call their people to order.

“We have also engaged the Police and the NSCDC to provide cover for our men and equipment during emergencies.”

On funding, the CG said, “There is a section of the National Insurance Commission Act that says they should give certain percentage to the fire service, not to the Federal Fire Service, but the fire services at the federal, states and local governments.

“So, we are engaging the management of NAICOM to ensure that the money is released for the maintenance of our fire trucks and for capacity building.”

Related Topics:FeaturedFederal Fire Service
Up Next