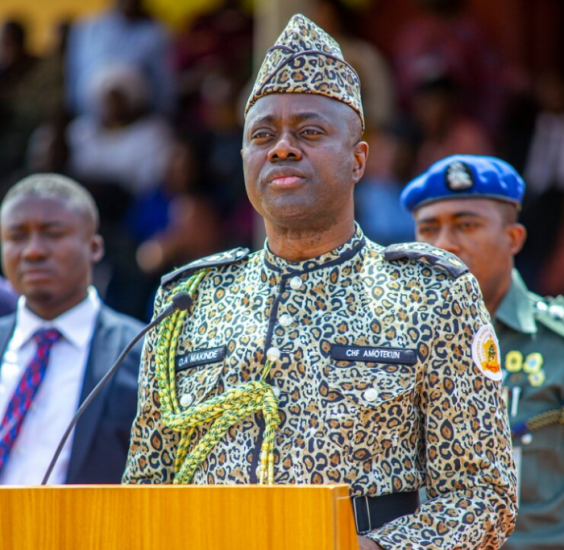 Motorists in three cars have been attacked by hoodlums suspected to be herdsmen in Eruwa, the capital of Ibarapa East Local Government area of Oyo State.

The incident, which occurred at Okolo in the Eruwa area, was said to have led to the burning of a Fulani settlement by some angry residents, according to a saharareporters’ report.

This came after the Commandant of Oyo State Security Network Agency (Amotekun Corps), Col. Olayinka Olayanju (retd), had declared that Ibarapaland was safe and free of killer herdsmen and kidnappers.

He also said many travellers who sustained injuries during the attack had been taken to an undisclosed hospital for treatment,

He however added that nobody was killed in the incident.

The state government on Monday said the Ministry of Health in the state had commenced the treatment of three victims of herdsmen attacks in Igangan area.

Commissioner for Health, Dr Bashir Bello, who spoke to newsmen in Ibadan, said that they were currently receiving treatment in a government hospital in Ibadan and in stable condition.

Bello stated that the decision to relocate the victims of herdsmen attacks to Ibadan was taken by Oyo State Governor Seyi Makinde during his visit to Igangan last week.

He said that the governor had directed the state’s Ministry of Health to arrange for the state government to foot the hospital bills of the three victims.

A statement signed by the Chief Press Secretary to the governor, Mr.Taiwo Adisa, quoted the commissioner as saying that all necessary biomedical and laboratory investigations had been conducted on the three victims.

He added that the trio, namely Isaiah Seun, 26; Emmanuel Aderogba, 71; and Adekola Adeyemo, 65, had been attended to by both orthopedic surgeons and specialists, and that they were all doing well at the Ring Road State Hospital, Adeoyo.

He maintained that the cost of all the investigations done, laboratories’ investigations and the x-rays were taken by the state government, adding that the hospital management had been given the mandate to give the victims everything required without paying any bill.

According to Bello, Makinde gave his word at Igangan that the victims would be taken care of, even if it required tertiary health facilities’ attention, noting, however, that upon evaluation, it was discovered that the three cases could be managed properly by secondary health facilities.

He said, “Following the directive of His Excellency that the ministry should take charge of the three victims of herdsmen attack at Igangan. The Permanent Secretary of the Ministry of Health, the Permanent Secretary of the Hospital Management Board and a team of medical doctors went down and combined with the chairman of Ibarapa North-West LCDA, and brought the three victims; one is Isaiah Seun, a 26-year-old bricklayer and commercial motorcycle rider before the injury occurred. He had a head injury and was fairly conscious and alert when brought in.

“The second was an elderly man of 71 years, Mr. Emmanuel Aderogba, with a fractured right radius. He is also being hospitalised. The third man is 65-years-old, Mr. Adekola Adeyemo, also with a head injury. He was a tree-felling machine operator.

“All of them have been taken care of; X-rays were done for those with fractures and head injuries. All necessary biomedical and laboratory investigations have been conducted. They have been attended to by both orthopedic surgeons and specialists necessary and they are all doing well now in the hospitals. They are all at Ring Road State Hospital, Adeoyo.

“I must mention that all attentions given, investigations done, laboratories investigations and the X-rays were free because the costs were borne by the state government.

“They will also be very happy to report on their state of health and the hospital management has been given the mandate to give them all that is required, that is, without any bills. All bills will be settled by the Hospital Management Board and the Ministry of Health.

“The governor gave the word that he will take special care of them even if it will require tertiary attention. But by our evaluation, it is a case that the secondary health care facility can properly manage. We thank the governor for the very positive action taken and we also thank him for his concern for the welfare of the citizenry entirely.”