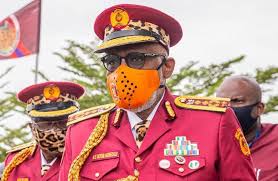 Three farmers have been killed in an attack on a community in the Ijugbere area of Owo Local Government Area of Ondo State.

The development is coming a few days after two people lost their lives when bandits attacked operatives of the Ondo State Security Network Agency, also known as Amotekun, in the same local government area.

Olotu said those criticising the governor for issuing a seven-day ultimatum to herders should be charged as accomplices in the attack.

He said, “Three farmers were killed on Saturday night here at Ijugbere. The place is gradually becoming like Zamfara.

“Those accusing the governor of ordering illegal occupants of the forest to vacate the place should be charged as accomplices. They should bury their heads in shame.”

In January, Akeredolu had issued a seven-day quit notice to herdsmen operating illegally in the state’s forest reserves.

The governor also banned underage grazing, night grazing and movement of cattle within the cities and on highways.

The eviction notice generated a lot of reactions, and after a meeting with different stakeholders, Akeredolu asked the herders to register with the government for proper identification.