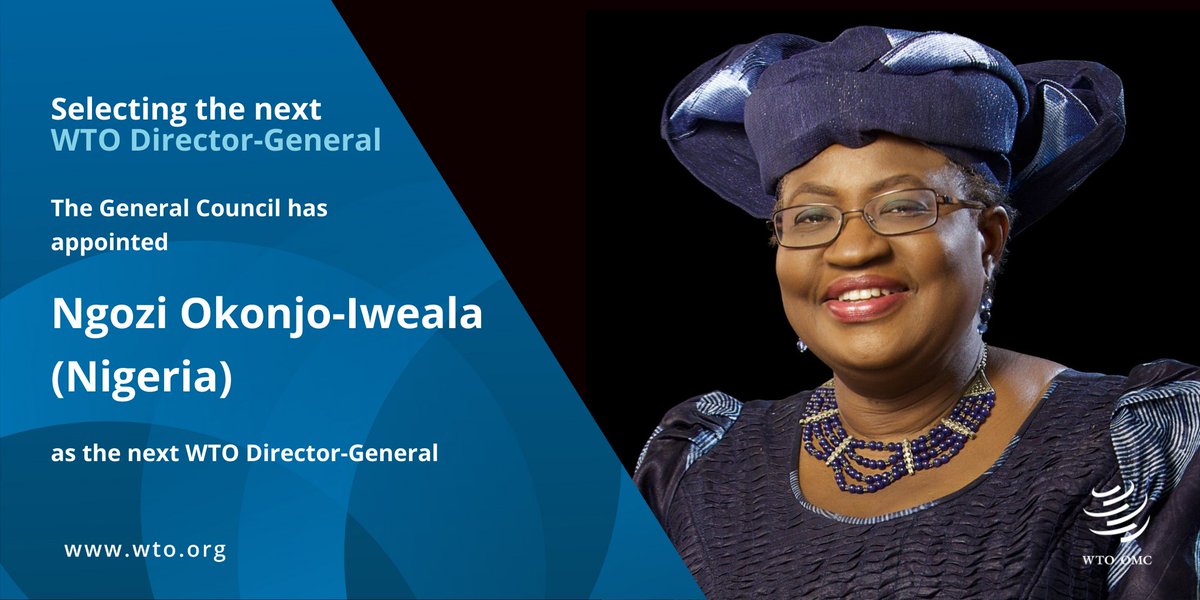 Ngozi Okonjo-Iweala, the first female director-general of the World Trade Organisation (WTO), says she is honoured to have been selected as the one to lead the WTO.

“I am honoured to have been selected by WTO members as WTO Director-General,” Okonjo-Iweala said on Monday afternoon.

“A strong WTO is vital if we are to recover fully and rapidly from the devastation wrought by the COVID-19 pandemic. I look forward to working with members to shape and implement the policy responses we need to get the global economy going again.

“Our organization faces a great many challenges but working together we can collectively make the WTO stronger, more agile and better adapted to the realities of today.”

Okonjo-Iweala was appointed the DG on Monday after months of uncertainty at the trade body.

The WTO thanked the former minister for her graciousness and patience through the selection process.

“Dr Ngozi, on behalf of all members I wish to sincerely thank you for your graciousness in these exceptional months, and for your patience.

“We look forward to collaborating closely with you, Dr Ngozi, and I am certain that all members will work with you constructively during your tenure as Director-General to shape the future of this organization,” he added.

Walker, who is from New Zealand worked together with co-facilitators Dacio Castillo (Honduras) and Harald Aspelund (Iceland) through the nine-month DG selection process.

Meanwhile, President Muhammadu Buhari has felicitated with Okonjo-Iweala, on her selection as WTO DG, bringing joy and more honour to the country.

The President says her track record of integrity, diligence and passion for development will continue to yield positive results and rewards to mankind.

Buhari affirmed that Okonjo-Iweala, who over the years set major records of economic reforms in Nigeria as Minister of Finance, and later Minister of Foreign Affairs, would excel in her new position and validate the global mandate of repositioning and strengthening the multilateral institution for the greater good of all.

The President joined family, friends and colleagues in wishing Dr Okonjo-Iweala well in her new endeavour.

Dr (Mrs) Ngozi Okonjo Iweala is a woman I know very well, because we worked at close quarters between 2003 and 2007, when she served in our administration in various capacities, most notably as finance minister.

It is not hyperbole when I say that no one could be more qualified for the job of Director General of the World Trade Organisation than her, and I congratulate her for her success at being the first female and African DG of the WTO.

She is an apostle of free trade and an astute manager of people and resources, and the world will be a much more prosperous place by her elevation to this enviable height.

As the world prepares to emerge from the global pandemic of COVID19, the planet needs a steady hand at the wheel, to drive global trade, and rebuild from the devastation wrought by the virus. We would not need someone who thinks they can pull this off. We would need someone who has actually and serially pulled it off before. And that person has emerged.

Ngozi, Africa and Nigeria are proud of you and my family and I are full of joy at your victory. Go to Geneva and make us proud, as we know you will.

Congratulations once again and may God bless your tenure.

Congratulations to my friend Ngozi Okonjo-Iweala on becoming the first female Director-General of the @wto.

I’ve known Ngozi for many years. Her strong will and determination will drive her to tirelessly promote free trade to the benefit of people worldwide.

As she prepares to lead the World Trade Organization (WTO), I congratulate Dr. Ngozi Okonjo-Iweala on her emergence as the next Director General.

I wish @NOIweala all the best in this new assignment, and hope that her tenure at the helm of the WTO helps to address some of the barriers that limit trade in Africa and other developing countries.

I heartily rejoice with Dr Ngozi Okonjo-Iweala on her emergence as the first African and first female Director-General of the World Trade Organization (WTO).

I also congratulate Nigeria on the latest feat of its great daughter on the international stage and applaud President Muhammadu Buhari, whose unwavering commitment contributed to the acknowledgement of the sterling credentials of her and her ultimate triumph for the position.

With her latest feat, the former Nigerian Minister of Finance and Managing Director of the World Bank has again brought honour to Nigeria, Africa and women everywhere.

I pray for Almighty God to imbue her with good health and wisdom to succeed in the task just as I urge her to deploy her famed intellect, experience, energy and integrity in leading the WTO to promote global prosperity through fair trade.

On behalf of all Deltans, I join all Nigerians in congratulating one of our most renowned citizens, Ngozi Okonjo Iweala, on her emergence as the next Director-General of the World Trade Organisation.

Over the years, we have all followed your growth and celebrated your noteworthy achievements. This is why, as you begin your new role at the helm of the WTO, I want you to know that you have the unwavering support of both your home state and your country!

Dr (Mrs) Ngozi Okonjo-Iweala @NOIweala has always been a shinning star, not just in our country Nigeria, but across the world where her leadership impact has been felt.

Her appointment for this lofty position as DG @WTO has not come as a surprise to those of us who know her well. I am definitely sure she will perform creditably in her new assignment.

The party describes her emergence as victory for competence, global due process and consensus needed to pilot the activities of the world trade body, especially at this critical period in the history of the world’s economy.

The @OfficialPDPNig notes that the development has again brought honour to our nation adding that it is proud of Okonjo-Iweala as a product of the PDP administration, whose excellence as Nigeria’s minister of finance, under whom Nigeria achieved our debt relief and revamped to become one of the fastest growing economies of the world.

The party also recalled Dr. Okonjo-Iweala’s success as the Managing Director of the World Bank, where she also displayed her capacity to effectively handle global economy’s issues.

The @OfficialPDPNig commends international stakeholders, including President @JoeBiden-led United States Government for the strong support given to Okonjo-Iweala, which points to the commitment of all stakeholders towards global consensus and economic recovery.

The @OfficialPDPNig restates its charge to the new @wto Director General to redouble her effort in bringing to bear her wealth of experience and competence to the world body.

Minority Caucus of the House of Representatives has congratulated former Nigeria’s Minister of Finance, Dr. Ngozi Okonjo-Iweala, over her final confirmation as the Director General of the World Trade Organization (WTO).

The caucus in a statement by the Minority Leader, Hon. Ndudi Elumelu, on Monday, observed that the emergence of Okonjo-Iweala as DG of the world trade body in spite of all the opposing huddles, “has reinforced global confidence in her competence and proficiency to head the world body”.

He said, “Indeed, the election of Dr. Okonjo-Iweala to head the WTO is well-deserving, given her huge experience, competence, commitment and track record of performance in global finance and economy as evinced in her successes as Nigeria’s minister of finance, Managing Director of the World Bank and various other international development bodies.

“We commend the global community for having confidence in Dr. Okonjo Iweala and particularly, the United States President, His Excellency Joe Biden, for the unwavering support given to her by his administration, which is clearly in recognition of Dr. Okonjo-Iweala’s competence.

“In the same vein our caucus commends the understanding and spirit of sportsmanship exhibited by the South Korean trade minister, Yoo Myung-hee in withdrawing from the race; another loud testament to Dr. Okonjo-Iweala’s suitability for the task ahead.”

The lawmakers charged Dr. Okonjo Iweala to, as usual, hit the ground running and bring to bear her skills, connections and wealth of experience in the onerous task of leading the WTO at this trying period in the history of global economy.

The caucus however urged the new WTO DG to have a special focus on Africa and the developing world, particularly at this time of economic recession, which has been worsened by the adverse effect of the COVID-19 pandemic.

Related Topics:FeaturedOkonjo-IwealaWTO DG
Up Next