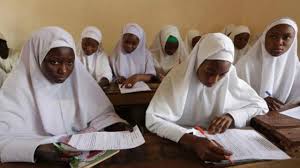 The Ilorin Emirate Youth Development Association has condemned the hijab crisis in some schools in Kwara State, describing it as unfortunate.

A meeting between the Kwara State Government and leaders of the two religions in the state, Christianity and Islam, on the controversy generated by the wearing of the hijab by Muslim students in schools has failed to produce amicable resolution.

Both parties had reportedly refused to shift ground at the meeting presided over by the state Deputy Governor Kayode Alabi.

Ilorin Emirate Youth Development Association, in a statement by its National President, Alhaji Abdullahi Salaudeen, and the National Publicity Secretary, Alhaji Mohammed Jagunma, expressed disappointment with the turn of things amongst the two religious groups on the hijab issue.

It noted that Kwara State was named the state of harmony based the way peaceful coexistence of the Muslims and Christians over the years.

It stated that whoever was fueling the hijab crisis in schools in the state wanted a religious crisis and did not mean well for Kwarans.

It, however, commended the Kwara State Government for taking proactive measures by summoning a stakeholders’ meeting and ordering the immediate closure of affected schools in the state.

It urged the government to take far-reaching measures in finding a lasting solution to the problem that would avert a reoccurrence of this ugly incident in future.

The Christian leaders, however, disagreed, saying they would not allow that in mission schools.

The Christian leaders gave Muslim pupils in the affected schools the option of wearing caps or withdraw from the mission schools.

This matter became volatile, forcing the state government to shut down 10 missionary secondary schools in the state.

The state chapter of the Peoples Democratic Party (PDP) has earlier called for calm and peace, saying “we must not allow the issue to spark religious crisis.”

PDP’s spokesperson in the state, Tunde Ashaolu, in a statement, urged the parties involved to be tolerant, exercise caution and not allow the hijab to cause enmity between the adherents of the two religions.