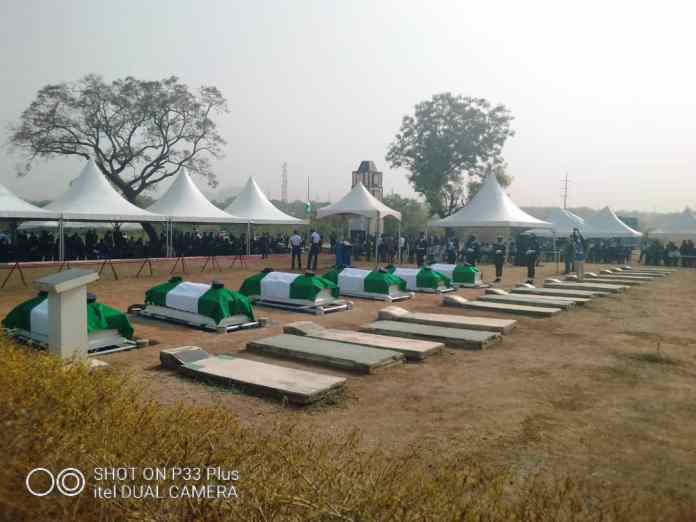 The Nigerian Air Force on Thursday performed the last rites for seven victims of Sunday air crash in Abuja as it committed their remains mother earth after a ceremony.

It assured those present at the funeral and indeed all well-meaning Nigerians that it would expose sponsors of terrorism in the country.

Flight Lieutenant Haruna Gadzama, a brave pilot, was said to have averted a major disaster in Abuja when a NAF plane, a Beechraft KingAir BB305i, crashed near a residential area in the city last Sunday, resulting in his death and six other personnel.

Their remains were interred at the National Military Cemetery, Abuja, on Thursday.

Their bodies were lowered into the grave at exactly 1pm, after they had been accorded full military honours and the traditional 21 gunshot salute.

He said NAF would do everything possible to ensure that the deceased officers did not die in vain.

He said, “The loss of these confident, courageous and professional young officers and airmen must spur the rest of us not only to rededicate ourselves to the service of our Nation, but also to resolve that we shall relentlessly expose and fight all agents of destabilisation and extremism in our society. We must throw everything that we have into this fight, to ensure that our departed colleagues did not die in vain.”

He also said, “The untimely death of these very promising gentlemen occurred on Sunday, 21 February 21 in Abuja while they were on active duty in service to our Fatherland. I must confess that, even at this moment, the Nigerian Air Force is still in palpable shock and grieving very deeply upon this loss of our gallant and courageous heroes, in whom we had so much confidence, with our expectations now suddenly and painfully cut short.

“We salute the supreme sacrifice of these young men, whose lot it became to give their lives in the defence of the peace which we all enjoy and often take for granted. These intelligent and disciplined young officers and airmen flew their quota of ongoing surveillance missions in the North East, North West and more recently in the North Central over Niger State and its environs in connection with the concerted efforts to secure the release of the staff and students abducted from the Government Science College Kagara, Niger State.”

The presiding priest and Director of NAF Chaplaincy, Rev David Gani, described the death of the officers as a trying moment in the history of the country.

Apart from family members of the fallen heroes at the burial ceremony, Chairmen of the National Assembly Committees on Defence, Senator Ibn Na’lla and Hon Shehu Diko and Minister of Women Affairs, Mrs Pauline Tallen, are also in attendance.

Related Topics:FeaturedfuneralNAFplane crash
Up Next