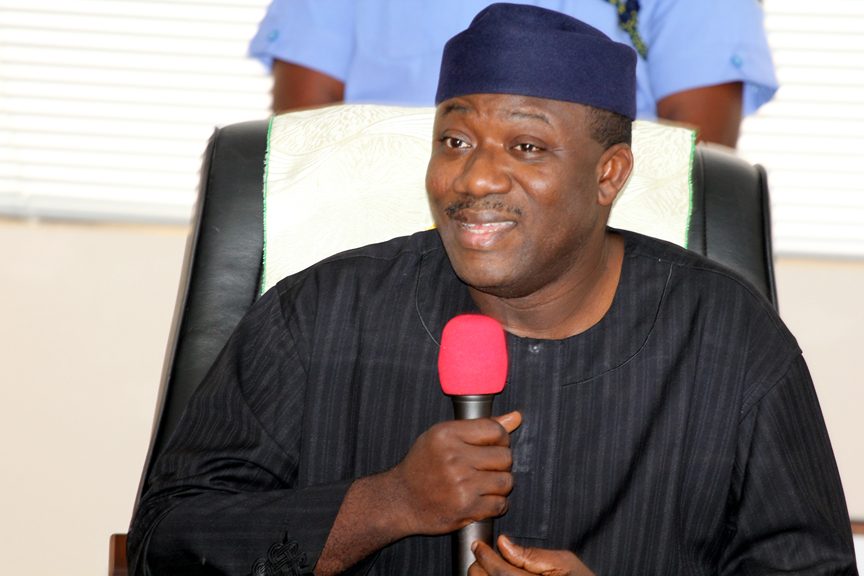 State governors have rejected the idea of the Federal Government negotiating minimum wage with the Nigeria Labour Congress (NLC) and imposing the structure on states.

They say the FG cannot impose its salary structure on them given the differentials in their revenues.

Chairman of the Nigerian Governors’ Forum (NGF) and Governor of Ekiti State, Dr Kayode Fayemi, faulted how the FG was treating the sub-nationals under a supposed federal system of government.

He spoke just as governors elected on the platform of the opposition Peoples Democratic Party (PDP) committed themselves to collaborate with the federal government to tackle the insecurity in the country.

A statement by the NGF’s Head of Media and Public Affairs, Mr Abdulrazaque Barkindo, said Fayemi spoke yesterday when the Committee of Pro-Chancellors of state-owned universities visited him in Abuja.

He described governors as victims of Federal Government’s unitary approach to a federal structure.

Fayemi spoke against the backdrop of protests by labour over a bill before the House of Representatives seeking to decentralise minimum wage negotiations.

The organised labour on Wednesday had stormed the National Assembly and states’ Houses of Assembly to protest the bill, which if it becomes law, will allow each state to fix its minimum wage.

But in a subtle riposte to labour’s accusation that governors, if allowed to fix minimum wage will pauperise workers, Fayemi said: “You can’t impose a federal salary structure on states because we do not all have the same economic or financial situations.

“I, for example, do not have the resources of Lagos State; so, you won’t expect me to earn the same salary as the governor of Lagos.

“It’s true that no state has fulfilled payment of salaries to states universities, but states are not always solely responsible for this. The people you appoint as vice-chancellors need to speak truth to power, they need to be able to bite the bullet, and not just be a yes person.

“We need to work together to confront these issues, we are running glorified secondary schools as universities by this system. You have to help us in insisting that the institutions too do the right thing.”

Fayemi also agreed with the team that politics should not be involved in the school system, even though he stated that there are smart people in politics in Nigeria.

“You need people who understand the structure. However, we have a lot of smart people in politics too who can add value, who knows that it is not about winning souls for the party. You can draw up a framework and guide. We can have the same criteria and achieve purpose,” he added.

He added that governments at the sub-national level are worried by the unitary approach to things in the country.

Earlier, the team, led by Pro-Chancellor of Osun State University, Mallam Yusuf Ali (SAN), told Fayemi that it is no longer news that education in Nigeria is in shambles due to paucity of finances, the unionism and students’ activities.

The team, which represents all the 48 universities owned by states, pleaded with the governors to take over the burden of payment of salaries of state universities, reintroduce scholarships for needy students and assist the committee to build a secretariat of to facilitate their activities.

Related Topics:FGgovsMinimum wage
Up Next