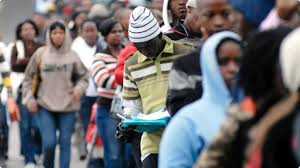 The country’s unemployment rate hit a new record high of 33.3 per cent in the fourth quarter, 2020 from 27.1 per cent recorded in the second quarter last year.

This is ranked third among a list of countries with the highest unemployment rate globally.

According to the latest Q4 unemployment report just released by the Nigerian Bureau of Statistics, a total of 23.18 million persons in Nigeria either did nothing or worked for less than 20 hours a week, making them unemployed during the fourth quarter (Q4) 2020.

According to StatiSense, a data technology company, Bosnia and Herz, with 33.7 per cent, topped the list of countries with highest unemployment rate globally.

This is followed by Angola, Mozambique, Kosovo, Jordan, Lesotho, Palestine and Swaziland.

According to the NBS Q4 report, Imo state recorded the highest rate of unemployment in Nigeria with 56.64 per cent.

This was followed by Adamawa with 54.89 per cent and Cross Rivers state with 53.65 per cent.