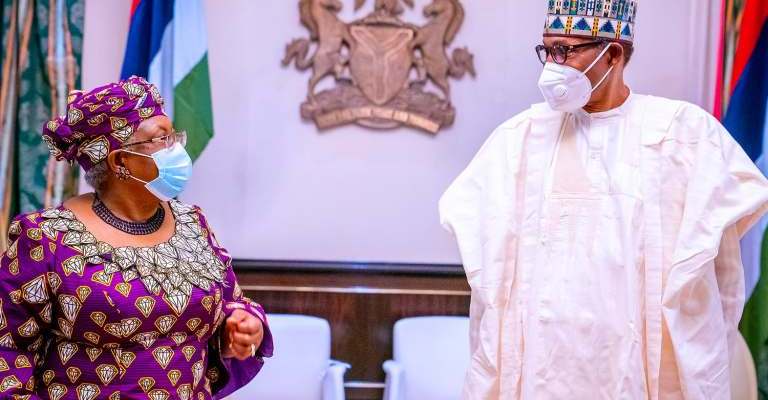 Director-General of the World Trade Organisation, Dr Ngozi Okonjo-Iweala, has expressed the WTO’s willingness to assist the country in surmounting its trade challenges, boost its economy and increase its global share of commerce.

She also spoke on ARISE TV and urged Nigeria to begin to transit from fossil fuel as the world is moving to cleaner energy.

Okonjo-Iweala, on a visit to the country, said agriculture could also boost Nigeria’s share of African trade, currently at about 19 per cent.

She urged the country to exploit the huge potential in the African Continental Free Trade Agreement (AfCFTA) to increase its share of the world trade, stressing that Nigeria’s 0.33 per cent share of global trade is poor.

President Muhammadu Buhari, who received her at the Presidential Villa, Abuja on Monday, attributed her emergence as WTO DG to her past record of performance locally and internationally.

Speaking during separate visits to the Minister of Industry, Trade and Investment, Chief Adeniyi Adebayo, and his Finance, Budget and National Planning counterpart, Mrs. Zainab Ahmed, Okonjo-Iweala expressed WTO’s willingness to assist the country in surmounting limitations to trade in order to increase its global share of commerce.

To achieve that, the former minister for the Economy and Minister of Finance called for value addition to Nigeria’s huge agricultural products for export.

Speaking during separate visits to the Minister of Industry, Trade and Investment, Otunba Adeniyi Adebayo and his Finance, Budget and National Planning counterpart, Mrs. Zainab Ahmed, the WTO DG said, “Nigeria’s share in world trade is 0.33 per cent. This is a very small fraction of what we could do. Our share in African trade is 19 per cent, a little bit higher and below our share of Africa GDP, which is almost a quarter of Africa’s GDP.

“What this means is that we can either look at it negatively or say it is a small portion of what world trade is, or we can turn it around and say it is a glass half full, optimistic side, and say that there is potential for us to do much more. That’s the message I want to convey to the country and Mr. President.

“This means we must step up our action on the economy. We must strive to do better and harder in several ways. The reason we are concerned about that is our youth. Majority of our population are young people who are looking for jobs.”

She added that trade could be instrumental to job creation and economic growth with value addition to products and good logistics to deliver trade.

Okonjo-Iweala further lamented that Nigeria currently ranks 103 out of 167 counties in terms of logistics.

Commending Nigeria for signing on to AfCFTA, the former minister noted that Nigeria accounts for 19 per cent of Africa’s trade, adding that the country could do much better.

The WTO DG called on Nigeria to urgently transit from fossil fuel to renewable energy, saying, “Before we know it, everywhere will be electric cars. So, not only because of trade, but it’s existential for us as a country that we begin to think about what we have.”

She also urged Nigerians not to despair over the current difficulties, adding that the focus should be to identify those areas where there was potential and turn the economy in that direction.

On the fossil fuel transition, she said, “The fact that fossil fuels are being phased out in the world as every country is announcing that as from 2025, 2030, 3040, they would no longer allow the use of fossil fuels; they would not allow cars that burn petrol and is all moving to electric cars and renewables.

“This is huge for the Nigerian economy. It means we’ve to begin thinking of the transition now. Gas is our transition fuel. Some of us are trying to argue for a little more time for countries that depend on gas to have a transition period.

“But it’s inevitably, the way the world is going, we’ve to transition out. And what does that mean? That means we’ve to start thinking what other sectors of the economy are going to bring in revenue to enable us to support imports and exports and create jobs because we’re very dependent on the oil and gas sector now.”

She said her visit was to thank the Federal Government and all Nigerians for the overwhelming support they gave her without which she would not have emerged as the WTO DG as well as to sort out where the organisation could support investments.

Nigeria’s debt rises by N700bn to ₦32.9tn in three months