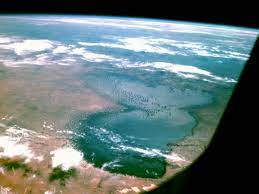 President Muhammadu Buhari has said there is a need for the urgent recharging of the Lake Chad, saying the shrinking of the lake has adversely affected the lives of more than 30 million people. President Buhari, who spoke on Saturday at the State House in Abuja, while hosting the President of the Republic of Chad, Marshal Idris Deby Itno, on a one-day official visit, also pointed out that the lake had lost more than 90% of its original size to the shrinking.

According to a statement issued by his Special Adviser on Media and Publicity, Mr Femi Adesina, President Buhari said it had become imperative that the countries on the Lake Chad Basin transfer water into the lake from the Congo Basin, in order to preserve it. “It is imperative that there be water transfer to the Lake Chad from the Congo Basin, so that the people can resume their normal lives,” President Buhari said.

He added that with inter-basin water transfer, farming, fishing, animal husbandry would resume, and curtail irregular migration of youths, who now dare the Sahara Desert and the Mediterranean Sea, to get into Europe, seeking greener pastures. “I’ve been engaging with the relevant stakeholders in Africa and beyond, on why we need to recharge Lake Chad. Nigeria will benefit more, but it is also advantageous to everyone,” President Buhari added. He appreciated Chad for its role in curbing insurgency in the region, particularly the Boko Haram challenge.

“We appreciate what you are doing on security. When I first came to office in 2015, I came to see you, as well as leaders of other neighbouring countries, because it makes sense to be in the good books of our neighbours.” President Buhari wished Marshal Itno well in the general elections coming up in his country in April. The Chadian leader thanked President Buhari for receiving him, saying, “We are neighbours facing similar challenges.”

“So the issue is really now its financing because we have a feasibility study. It’s something that’s going to be very capital intensive, cost a lot of money and we’re going to have to depend on technical partners, financial institutions and other partners to help to finance this. It’s something that is not just for Africans, the environmental impact of a shrinking Lake Chad, but it affects humanity and so everybody has to really mobilise to find the means to be able to carry out this recharging and the beneficiaries will be the whole of humanity. So the hope is there that we will achieve this, but the challenge is for us to be able to now realise the dream of recharging Lake Chad,” it stated.

Related Topics:BuhariFeaturedLake Chad
Up Next