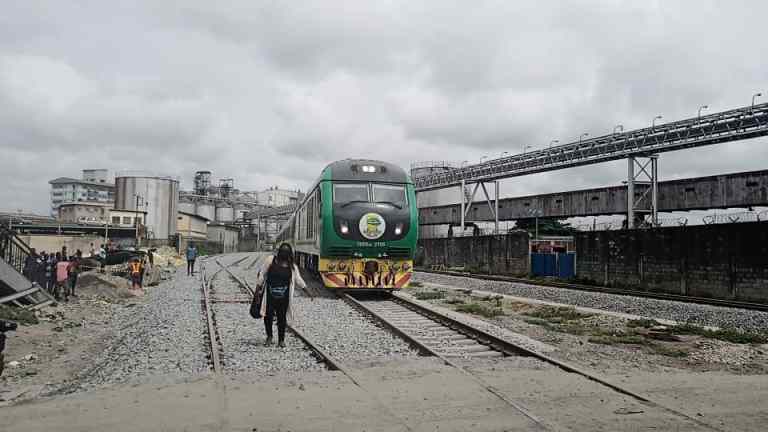 The Federal Government will go the whole distance to put measures in place to address flooding on the Lagos-Ibadan rail line, Minister of Transportation, Rotimi Amaechi has assured.
Addressing journalists in Ibadan during the inspection of the project, Amaechi said the Ministry is keeping its eyes on possible areas of flooding along the line with the aim of ensuring uninterrupted running of train services which flooding can disrupt. This came against the backdrop of compliant by residents of communities along the route of incessant flooding of their environment due to upsurge in rainfall. According to the Minister, “the technical committee will resolve the case of overpass, the problem now is the flooding challenge which we asked the committee to address. Ajegunle community is complaining of the need to build overpass and we cannot build overpass everywhere.

“During the raining season, we will observe where the construction has led to flooding as the citizens that have given us land must enjoy the sacrifice they made and when it happens, we will correct those mistake.” He called on the Ministry of Works and Housing to expidite action on the processes of obtaining approval to construct access roads to the sub-stations along the corridor. “The rains are coming, so you must hasten up with the approval or the construction will linger till after September,” he advised. With work along the route almost completed, lack of access roads to the stations especially in Ogun and Oyo states remain a cause of worry. Nevertheless, Amaechi assured that a date for commissioning of the project is on the verge of approval by President Muhammadu Buhari. “If you look at level of work now, we cannot ask the president to commission this, but once we give the China Civil Engineering Construction Corporation, CCECC definite time, I know they will speed up. “There are some minor things they still need to put in place but it’s taking them time to do that. Some of those things should not take more than a day or two to put in place. So I am not so worried. “On port, I have asked the permanent Secretary to discuss with the Nigerian Ports Authority, NPA, as tanker drivers disrupted the movement of train into the port recently and we have to stop them now, or we stop the owner of that terminal,” he added. On the slow pace of work, Amaechi said at this point “we can say to ourselves that we have tried from coverting a bush into usage that will grow the Nigerian economy. For CCECC, I am sick and tired of them and that is why I asked them to see us on Wednesday. Although, most of the things remaining are minor and cannot delay the movement of goods. They have promised to finish up by the end of the month.” The Minister was accompanied on the inspection tour by Dr Magdalene Ajani, Permanent Secretary, Ministry of Transportation; Engr Fidet Okhiria, Managing Director, Nigeria Railway Corporation, NRC; Eric Ojiekwe, Director, Press and Public Affairs at the Ministry and top officials of the NRC.
-Vanguard