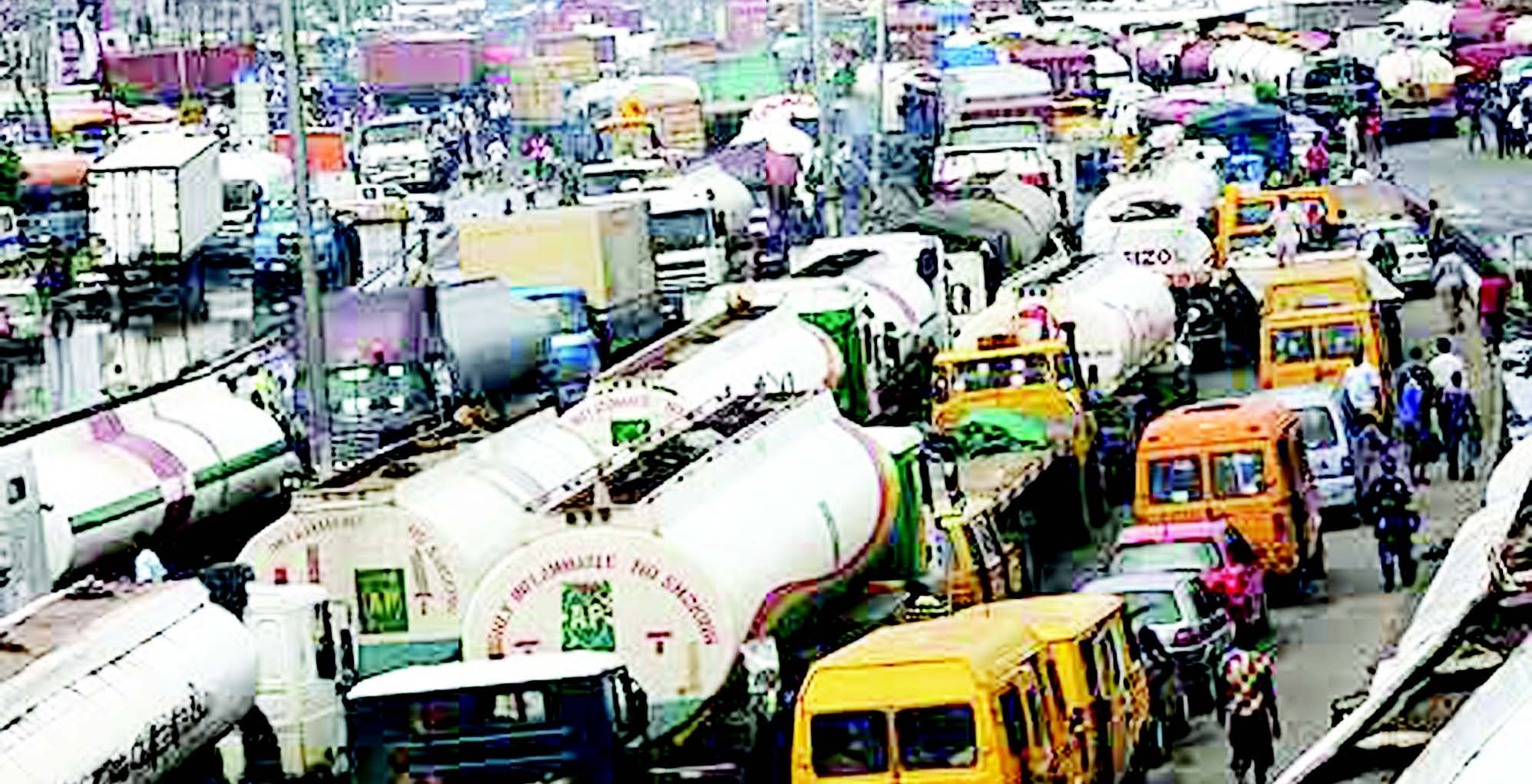 The Lagos Sector Commander of the Federal Road Safety Corps, Olusegun Ogungbemide, has said the Apapa gridlock is a complex situation that requires continuous support of stakeholders in the transport sector to fully address.

He notes that the gridlock is beyond traffic management.

He stated this when the Transport Correspondents Association of Nigeria, Lagos chapter, visited the command at Ojodu, Lagos, on Thursday.

He said if all transport stakeholders collaborated with government officials, the gridlock would be a thing of the past.

He said enforcement could only take care of 15 per cent of traffic challenges, adding that collaboration with stakeholders would go a long way in solving the challenges in the state.

Ogungbemide said, “The problem of Apapa is beyond traffic management; we have economic boom but no boom for individuals in terms of infrastructure.

“A family of four can have their four cars parked along the road in front of their house without a car park. Some trailer operators think of the number of trailers to purchase but not thinking of parks.

“As long as there is the volume of traffic on Apapa routes, the traffic will still persist; Unless there is multi-modern transportation.”

He commended the management of the Nigerian Ports Authority and the Lagos State Government for the introduction of the Traffic Management and Enforcement Compliance Team.

He also lauded the Federal Government for building a new freight rail line directly from the ports, adding that it would help a lot in easing the Apapa gridlock.

The sector commander said the completion of the rehabilitation of the Apapa Tin-Can Island Port road would also help in solving the problem of traffic in Lagos.

Reacting to Monday and Tuesday’s gridlock in Apapa, Surulere and other parts of Lagos, Ogungbemide explained that the truck park at Lilypond was closed, which led to indiscriminate parking of trucks.

He said it was discovered recently that trucks carrying export goods were in large number on Apapa road.

He said the office had suggested that all the truck companies should form an umbrella body to enable government agencies to easily reach out to them.

Ogungbemide said over 89 BRT buses that could convey about 4,450 people got burnt as a result of the end SARS crisis making a lot of people to be stranded.

“The media has been assisting us in our operation and I must commend the collaboration with other transport agencies in Lagos State.

“Lagos State is very dynamic and I have determined to change Lagos traffic positively. Remember the tanker/gas incident at Kara, the press assisted in pushing our efforts, which made people to recognise our presence.”

Ogungbemide appreciated TCAN members for the visit and wished the Chairman of the Association, Mr Dele Aderibigbe, a quick recovery from an accident he had recently in Lagos.

Earlier, the Vice Chairman of TCAN, Benjamin Alade, assured the corps of prompt media coverage of its programmes towards a crash-free state. 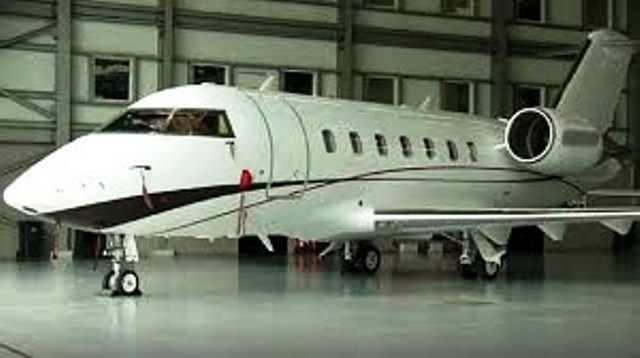 Nigeria Customs Service has threatened to impound private aircraft found to be unverified by the Federal Government’s agency as from July 6.

The Customs had earlier given the aircraft owners a 30-day importation verification deadline, ending on July 6.

Public Relations Officer of the Customs, Deputy Comptroller Joseph Attah, said at a briefing in Abuja on Monday that so far, only six owners of private aircraft had responded to the invitation since the verification window opened on June 7, 2021.

“The Service believes that owners of private aircraft are highly-placed individuals who would be willing to comply with extant laws of the land governing importation of the aircraft they own, this includes payments of all appropriate duties and taxes,” he said.

Attah also told owners of private aircraft or their representatives to report to the Customs headquarters in Abuja before July 6, with the necessary documents for the verification.

He also said there were indications that some people brought in aircraft under the Temporary Import Permit (PIP).

“The period for such temporary importation for some of the aircraft has expired and they have neither renewed nor re-exported the aircraft in line with extant laws governing that in Nigeria. At the end of the verification, some of the things we are suspecting will come to light and we will make further details known.

“As agency of government responsible for enforcement of laws governing imports and exports in Nigeria, the NCS will not hesitate to invoke appropriate sanctions on any defaulting private aircraft owner immediately after the expiration of the verification period on Tuesday July 6, 2021.”

Attah said the essence of the audit was to ensure that all aircraft privately owned in the country were properly imported and cleared with all appropriate taxes paid. 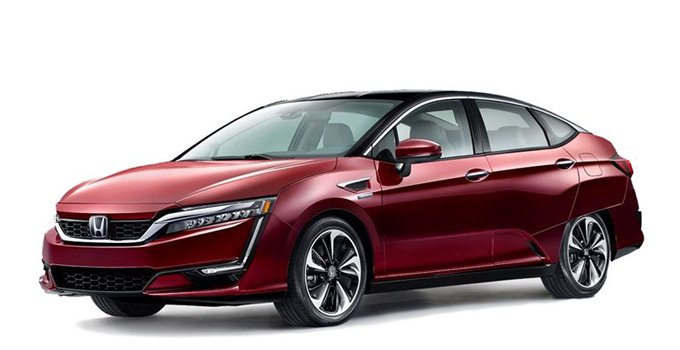 Honda says it has stopped production of the Japanese market Odyssey minivan and Legend sedan due to low sale of the hydrogen vehicles.

A Honda official told Autoweek, “We discontinued the RLX after the 2020 model year, so we haven’t had it in the lineup for about a year now.”

Honda launched the Clarity six years ago, and even though it’s going away it has not ruled out working on more hydrogen technology in the future.

“The entire Clarity series played a valuable role in advancing Honda’s portfolio approach to electrification, which is an important aspect of our commitment to reduce CO2 emissions,” the official said.

The official also said, “Now, with a commitment to carbon neutrality by 2050, Honda has set a target to make 100% of our vehicles sales battery-electric or fuel-cell electric by 2040.

“We are evolving our strategy with a focus on increased application of our two-motor hybrid system to core models in advance of the introduction of our first volume BEV models in 2024,” Honda told us.

The automaker noted that the fuel cell EV would play a key role in our zero emissions strategy, “which is being advanced by our joint manufacturing and development agreements,” Honda told us. “We continue to make significant investments in fuel-cell infrastructure and battery technology.”

To that end, Honda’s partnership with General Motors to develop fuel-cell vehicles and EVs is expected to continue.

The Clarity, Legend, and Odyssey were all built Honda’s Sayama plant, scheduled to close in March 2022.

The Clarity Fuel Cell was a lease-only car and it has been reported that a poor hydrogen refueling infrastructure contributed to slow demand for the model. 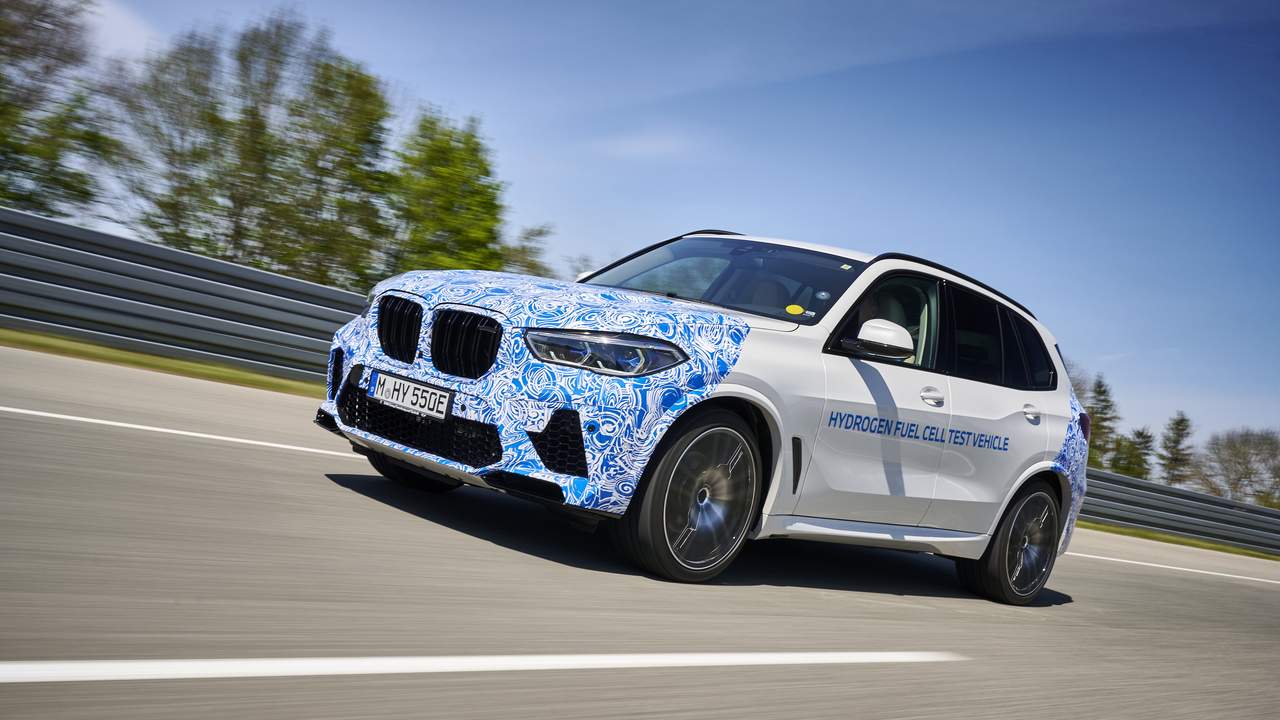 BMW has begun real-world tests of its i-Hydrogen Next, an X5 paired with EV and hydrogen tech.

The BMW i Hydrogen Next is an all-electric vehicle fueled by the reaction of hydrogen and oxygen in a fuel cell. The German automaker firmly believes that hydrogen fuel cell technology can replace internal combustion engines, plug-in hybrids (PHEVs), and battery-electric vehicles (BEVs) as the future of mobility.

Toyota and BMW are collaborating on hydrogen cars, with BMW planning to launch the i Hydrogen Next in 2022.

The i Hydrogen Next will see limited production, as BMW plans to devote more energy to EVs in the coming years.

According to multiple sources including Overdrive and Slashgear, both online auto journals, the testing that began this week will aim to tune the software controlling the car’s driving and operating functions, the automaker has said, following static tests of the fuel cell system and hydrogen tanks.

BMW has been experimenting with hydrogen fuel cell technology for decades.

But BMW’s efforts in this field are still a few rungs below Toyota and Honda, which have already fielded hydrogen fuel cell cars.

“Hydrogen fuel cell technology can be an attractive option for sustainable drive trains – especially in larger vehicle classes,” says Frank Weber, member of the Board of Management of BMW AG responsible for Development.

“That is why road testing of near-standard vehicles with a hydrogen fuel cell drive train is an important milestone in our research and development efforts.”

According to the automaker, hydrogen fuel-cell drivetrains could become an attractive alternative to EVs, but with a planned small-series production it’s not quite going all-in, unlike Toyota and a few other automakers that have marketed unique sedan designs for years.

BMW is also aiming to get practical experience using this drivetrain in real-world conditions.

The i Hydrogen Next will pair BMW’s eDrive technology already rolled out in vehicles like the iX3 with a hydrogen fuel cell technology developed along with Toyota—one of the other major players in this field.

The vehicle is largely based around architecture and technology borrowed from existing vehicles, rather than being a model developed entirely from scratch, which suits the model’s planned small-series production volume.

The SUV promises 374 hp—the same as the most powerful inline-six gas engine in the automaker’s lineup, as BMW points out.

“The energy stored in the performance buffer battery is generated in a particularly efficient way during driving by recovering energy from coasting overrun and braking phases,” the automaker said.

It also stated, “The hydrogen needed to supply the fuel cell is stored in two 700-bar tanks made of carbon-fiber reinforced plastic (CFRP), which together hold six kilograms of hydrogen.

“Its precisely controlled reaction with oxygen in the fuel cell generates electricity, while water vapor is the only emission produced by the drive train.