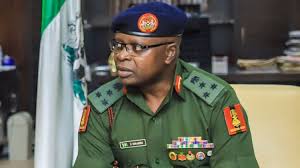 Director-General of the National Youth Service Corps, Shuaibu Ibrahim, has defended the scheme amid controversy whether to scrap or retain it, saying the programme remains critical to the unity of the country.

He insists that the scheme is not a waste of time, adding that its relevance in integration and national cohesion must not be underestimated

The brigadier-general spoke on Wednesday in his office in Abuja.

He said the NYSC had been a useful tool for the socio-economic development of the country through the deployment of corps members to states outside their base.

He said the corps members contribute in many ways to the lives of residents of their host communities.

“NYSC is not a waste of time, wherever corps members are posted to, they have been adding value in order to be remembered with good legacies,” Ibrahim said.

The bill, which has passed first reading, was sponsored by Awaji-Inombek Abiante, a Peoples Democratic Party (PDP) lawmaker from Rivers state.

Abiante said that the NYSC scheme has failed to achieve its intended purpose and therefore should be discontinued.

He also said the scheme has led to the untimely death of some corps members who were posted to areas with serious security threats.

Reacting, the NYSC DG said the scheme has partnered with security agencies to ensure adequate protection for corps members during their service year.

He said corps members will also be educated on the importance of being security conscious while in their host communities.

“Security is everybody’s business and security challenge is not limited to NYSC alone”, lbrahim said.

“We want to appeal to parents to help us also sensitise their children not to endanger their safety. Every country has challenges but we should turn our challenge into opportunities.”

Ibrahim added that the NYSC’s posting and deployment policy is based on strict guidelines and regulations.

“Posting, redeployment and other services are free in NYSC. Relocation is done on health and marital grounds with genuine reasons”, he said.

“Parents should teach their children to be patriotic and have human feeling. Let the spirit of NYSC be in use for the betterment of our country.”