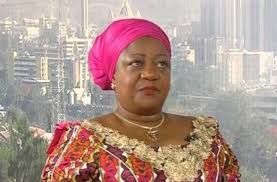 The Senate on Wednesday asked its Committee on the Independent National Electoral Commission to screen Special Assistant to the President on Social Media, Lauretta Onochie, as a National Commissioner of INEC representing Delta State.

This is coming about eight months after President Muhammdu Buhari forwarded her name and five others to the Senate for confirmation.

Her nomination had generated controversy as many argued that her choice was not in order in view of her alleged ‘partisanship and identification’ with the All Progressives Congress.

Protests among the Peoples Democratic Party members in the red chamber had halted the process of the screening as the opposition federal lawmakers were said to have accused Onochie, who is presently a presidential spokesperson, of unnecessarily casting aspersions on their party.

The Senate INEC panel, which has Senator Kabiru Gaya as Chairman, has four weeks to conclude the screening and report back to the red chamber at plenary.