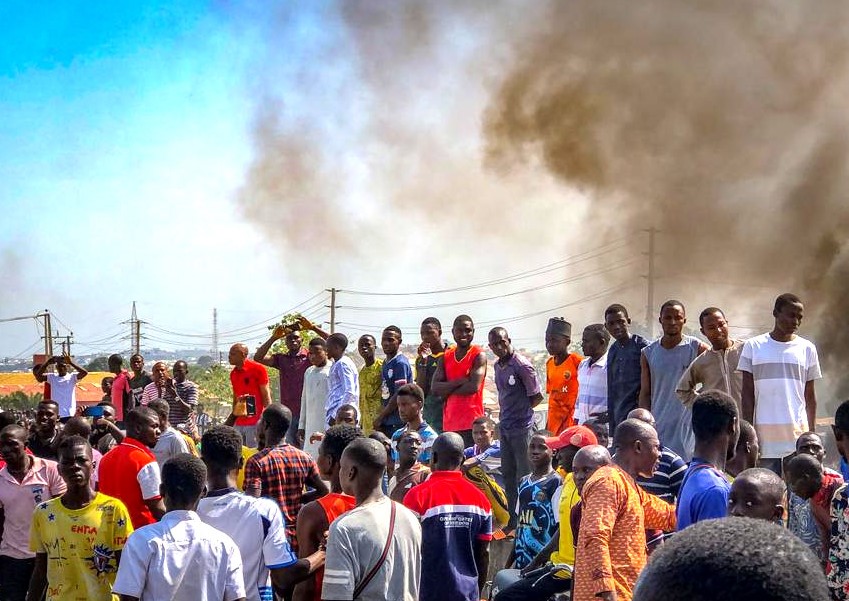 Protesters, mostly youths on Saturday blocked Kaduna-Abuja highway after the reportedly killing of four people and the abduction of 49 others by bandits in Angwan Madaki, Kakau community, Chikun Local Government Area of Kaduna State.

The community, which is located on the outskirts of Kaduna metropolis, was said to have come under persistent attacks by bandits throughout the week.

The latest attack, according to sources in the community, occurred on Friday at about 10pm when the bandits, in their numbers, invaded the community and killed two people.

About 20 others, including a chief, his wife, and brother were abducted in the attack.

Speaking in a telephone interview with TheCable on Saturday, a source who spoke on the condition of anonymity,  said a total of four people were killed while 49 people were abducted within three days.

“Yesterday (Friday) at about 10pm they came and killed two people and kidnapped 20 others including the Chief, his brother and wife.

“Throughout this week, our community had been under constant attack by bandits.

“This angered the youths and this morning (Saturday), they blocked the Kaduna -Abuja road by the overhead bridge, to expressed their frustration over the security situation.”

The source lamented that despite the location of two female soldiers’ camps close to the community, the attacks have continued unchecked.

He added that a lot of people have fled the community as a result of the incessant attacks.

Mohammad Jalige, the spokesman of the Kaduna state police command, could not be reached as his phone was switched off when contacted to speak on the incidents.