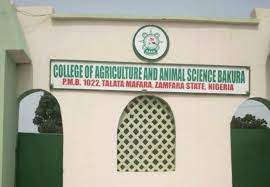 A student of Zamfara College of Agriculture and Animal Science Bakura and two members of staff kidnapped by bandits on Sunday have escaped.

The three escaped people returned to the college on Monday morning, according to the school authrity.

Deputy Provost of the College, Ali Atiku, disclosed this in an interview with reporters on Monday.

He said, “Two staff and one student escaped from the bandits after they kidnapped them and returned to the school early this morning.

“As I am talking to you now, we have formally discovered that the bandits have kidnapped 15 students all of them male, three women and one person who are also our staff and killed two of our security watchmen.”

Related Topics:BanditsZamfara College of Agric
Up Next 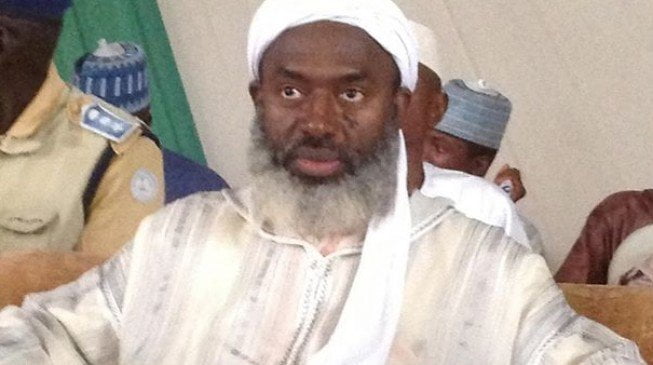 Islamic scholar, Sheikh Ahmad Gumi, has revealed that declaring bandits as terrorists will come at a price, which will result in the involvement of the foreign Jihadist movement.

According to Gumi in a statement titled, ‘Declaring Bandits As Terrorists Will Come With A Prize,’ the moment they are termed as terrorists, unemployed youths may find it palatable and attractive and join the terrorist group.

The statement read, “Nobody doubts that sentimentalism today overrides sensibility in our polity. For the sake of posterity, some people will have to speak out.

“The acts the bandits are committing now in NW have gradually over time become tantamount to terrorism because wherever innocent people are fatal victims it’s pure terrorism. Yet, innocence these days is relative. We agreed if their children and women are also killed, they are guilty by association or collateral damage, so also the bandits may think the same way.

“It’s right for vigilantes to lynch Fulanis herdsmen or anyone that looks like them by profiling but wrong for the herdsmen to ransack villages in retribution. They are pushed to believe it is an existential war and in war, ethics are thrown to the winds.

“Yet again, the only helpful part that is against bandits is that no other than them are attracted to join them in the NW because of its ethnic tinge and coloration. However, the moment they are termed Terrorist – Islamic for that matter, the direct foreign Jihadist movements will set in in force.

“And many teaming unemployed youths may find it palatable and attractive. Shouting ‘Allahu Akbar’ plus AK47 against a ‘secular’ immoral society where impunity reigns are the magnet for extremists and downtrodden – the majority of our youth.

““Already these deadly terrorist groups are fighting for the soul of these bandits. This will give criminality a spiritual cover and remove the stigma of discrediting them with such crimes since now they are fighting a ‘Jihad’ as they will claim. In such a situation, does the larger society -as it is- has the moral high ground to fight back? This is the most probable consequence, the price of which is not worth it. Nothing stops the kinetic actions from going on without the controversy of semantics.” 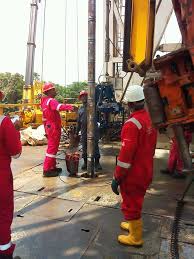 A community in Delta State, Tuomo, host to Nigeria Agip Oil Company, in Burutu local government area, has shut down its oil/gas facility over breach of agreement and failure to provide basic necessities for the community.
The community folk, including men, women, youths and the elderly, armed with placards, trooped out and besieged the facility in a protest, Monday, chanting battle songs and calling on the management of NAOC to do the needful.
Some inscriptions on the placards read: “we say no to Agip, enough is enough, Agip, provide our light, no light no work, Tuomo community will not allow Agip to work until we get our light, bye-bye to Agip among others.
Chairman of Tuomo community, Mr Tomke Binebai, who led the protest, said: “Tuomo people have taken their decision against Agip and we’ll remain here until our demands are met.
“Agip has been promising and deceiving us since their operation here in 2009, they promised to provide light for Tuomo as their host. If you go to their station, there’s steady electricity supply but their host community is in total darkness.
“Enough of this insult and embarrassment, we’ve taken our decision and if they really want to operate here, let them light up Tuomo, pay the surveillance chances, employ our youths and adhere to the GMoU.

“It’s ridiculous to say that since inception, Agip has not employed a single youth in this community, they have been dribbling us and we’ve decided that we have come to stay in our own land where Agip is occupying”. 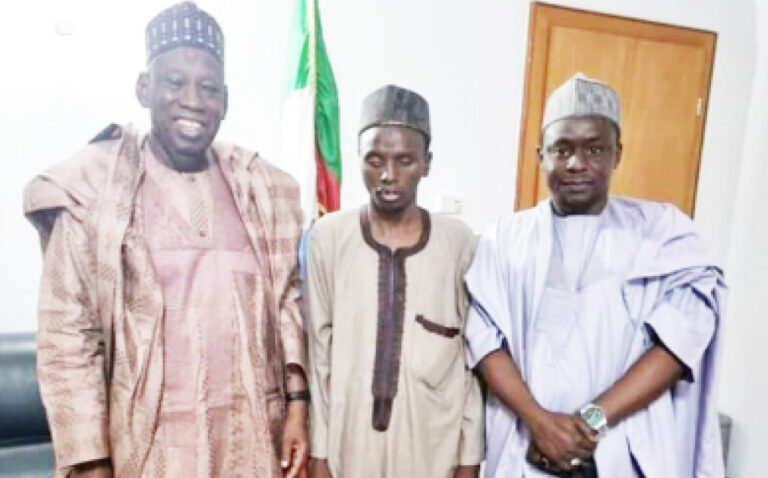 Dahuru (middle) when he was hosted by Gov. Ganduje

At the beginning of the year, Dahuru neither had his personal house nor a paid employment.

But things changed for better after a Daily Trust report brought him to the limelight.

The report had focused on how he did not allow his physical impairment to hinder his quest for education as well as to contribute his quota to the society.

A philanthropist had earlier reached out after the Daily Trust story published on September 25 and bought a three-bedroom apartment for Dahuru and his family, who were hitherto living in a rented house.

The state government, through its commissioner for education, Muhammad Sanusi Sa’id Kiru, also reached out on Saturday following the publication of a video of Dahuru on Daily Trust platforms.

Governor Abdullahi Umar Ganduje, who met with Dahuru on Sunday in his office in company of the commissioner, asked the young blind teacher what he wanted the state government to do for him, to which he (Dahuru) reiterated his earlier appeal for a permanent and pensionable employment.

This is the same school Dahuru had his primary and secondary education.

A provisional offer of employment was immediately printed and offered to Dahuru at the office of the state’s commissioner of education pending the formalization of his employment by the Office of the Head of Civil Service.

The commissioner told Daily Trust that immediately he saw the trending report online on Saturday, he started looking for way to reach out to the blind teacher and fortunately he got through to him through this reporter.

“There and then I called Excellency, the governor, and briefed him about it and he requested that I should bring him to give him words of encouragement.

“To God be the glory his Excellency has seen him and blessed him with words of encouragement and appreciated his courage. Though a blind person but educated up to NCE (and now studying for a degree)

“Having been impressed with the good determination of the gentleman, His Excellency directed that I should offer him employment as a teacher on grade level 7 and to post him to Tudun Maliki Special Education school. So Dahuru is now an employed teacher with Kano State Ministry of Education.”

He said the governor’s gesture was encouraging with the hope that more people like Dahuru will emulate the young blind teacher.

“I also want to congratulate Dahuru for this exceptional appointment, at this very hard time, for somebody to get employment is highly encouraging.

“I also thank Daily Trust for doing this humanitarian story, especially the reporter and their editors. You have done an excellent job and God Almighty will reward you”, the commissioner said.

Daily Trust reports that Dahuru is currently studying at the National Open University of Nigeria (NOUN) on a full scholarship courtesy of Professor Uba Abdallah, the immediate past Vice Chancellor of the institution.

Similarly, following Saturday’s publication of Dahuru’s video, Near Foundation offered him a N10,000 monthly transportation support till the end of his study at NOUN.

Days earlier, a philanthropist, who asked not to be named, had bought a house for him at a destination closed to the school where Dahuru was volunteering.

The house was also furnished by the philanthropist.

The story had captured Dahuru’s struggles in life and how he overcame the challenges to become educated and a contributor to the development of others.

In the story, Dahuru narrated how he withstood the rigours to earn himself a National Certificate of Education (NCE) and secured scholarship into a degree program to further his ambition to one day become a lecturer.

After the story, the philanthropist had reached out to Dahuru through Daily Trust and the outcome of their meeting was a new home for Dahuru and his family as well as some cash gifts.

From that day, the blind volunteer teacher said he could not sleep properly and had almost sleepless nights for the change that came to him which he never dreamt of.

According to him, since the time he was handed the papers of the house, he sees it as a dream and could not believe he is now a property owner.

“I still see it as a dream, unless if I remember the man and what he said when we visited his house.

“I have been struggling to get what is better but never thought of getting a house as nice as this one. Though I cannot see but I feel its beauty in me. Many people have said it. My elder brother has been talking about it all these days. To be honest with you, this is the talk of the town in our area, our house and the neighborhood.”

Dahuru’s family said they were surprised further when the philanthropist sent some people to bring furniture for their new home.

“I doubt if we have this type of people in the world. While we are celebrating the purchase of the house, we just received a call that the man said we should wait for the furniture. To our surprised he sent his boys with three sets of new furniture for the three rooms. This is beyond imagining in our minds. We have no words to thank him enough, may Allah reward him abundantly and may the gentle souls of his parents rest in eternal peace,” Dahuru’s mother said while praying continuously for the man.

His father, who has been suffering from an ailment for years, said Dahuru is a blessing to his family and has brought a lot of development that they never thought of getting.

“We don’t have a house, we live in rent house. The house we are living presently is uncompleted and some parts are fenced with roofing iron. But today just like a dream we have our own well-furnished house, with electricity and all other things needed. We thank Almighty Allah for this change that come to our life.

“We also thank the man who did this for us. We don’t know him yet, and we asked if we could go and thank him but he said no. So wherever he is, we wish him the best. We will forever be grateful to him and we will never stop praying for him, his parents and entire family.

“For you (our reporter) and Daily Trust that have been the source of this life changing gift to us, we want to say thank you. We wish the Daily Trust and its entire staff the best. You will remain in our history forever,” the old man said in tears.