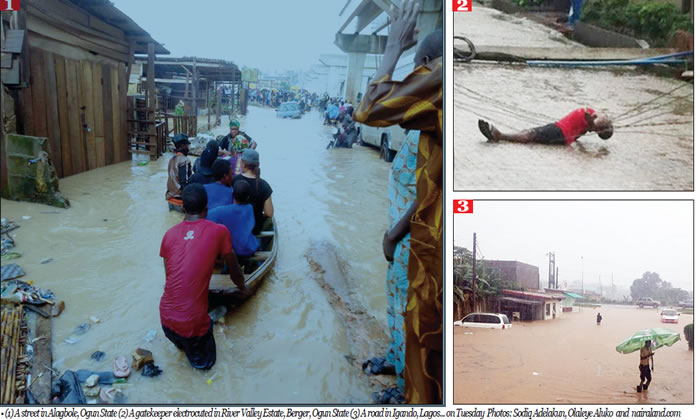 The Lagos State Government has urged residents in flashpoint areas within the state to relocate to a safer place ahead of September when the rains may be heavy and frequent, which may wreck havoc.

The state Commissioner for the Environment and Water Resources, Mr Tunji Bello, stated this, just as he noted that plastic waste had become a problem for the state.

He also hinted that the state government was partnering plastic producers with a view to finding a lasting solution to this menace.

He spoke at a press briefing to give an update on the state’s preparedness for the resumption of heavy rainfall in the month of September.

He said, “The Nigerian Meteorological Agency (NiMet) at the beginning of every year with 2021 inclusive usually forecasts the expected rainfall temperature patterns spanning the entire country.”

He said the peculiarity of the state as a coastal state and its strategic position as the economic hub of the nation made it expedient for the state to disseminate crucial information on the 2021 rainfall prediction earlier in the year to allay the fears of residents and prepare them ahead of the likely consequences of the rains.

He said that as predicted by NIMET, the state would experience normal rainfall of between 238 and 261 days this year, while the maximum annual rainfall for 2021 is predicted to be 1,747mm.

His words: “Due to the pro-active nature of measures we put in place, when Lagos witnessed a heavy downpour of over eight hours on Friday, July 16, by the next morning which was some 10 hours after the rain subsided, all the flash flood which had submerged many homes and vehicles especially in Marina had disappeared thus vindicating our stand.

“The same level of preparedness is what we have in store for the advisory by the management of Ogun Osun River Basin Authority on release of water from the Oyan Dam in September.”

Bello further noted, “We are stepping up the dredging and cleaning of all our channels and would also use the opportunity to once again put the residents of low-lying areas areas especially those in the river banks like Agiliti, Ajegunle, Isheri North, Owode, Iwaya, Makoko, Badia, Ijora, Isaalu, Pota and Shibiri etc on notice to be at alert that they may have to relocate to higher grounds to save their lives and properties when the water is released by Oyan Dam authorities.

The commissioner pointed out the state government would also be collaborating with sister state of Ogun in order to optimally respond to whatever challenges that the release of water could bring to the two states and the areas contiguous to the Oyan Dam.

He said, “Let me also state that due to the costal nature of Lagos State, one major contributory factor to possible flooding is Sea level rise. This has always posed risks to us as a coastal state, as anytime there is high tidal movement, it may ‘lock up’ the discharge points of our drainage channels and until it recedes, there will be no discharge. Such occurrences also cause backflows, resorting to flooding. But as soon as the lagoon recedes, all the generated storm water run-off will immediately discharge and our roads will be free of flash flood.

“As the strong winds expected to be experienced during the onset and cessation of every rainfall calls for caution, the envisaged hazy weather may also cause reduction in visibility that can bring about flight disruption and loss of revenue due to delays and outright cancellation. Guided by core principles of providing a flood-free and hygienic environment in the state, this ministry is providing all-year-round drainage maintenance for effective and efficient flood control with diligent dredging of all primary channels and cleaning/de-silting of all secondary collectors, to enable them to discharge efficiently and act as retention and/or detention basins. This is in addition to a revitalised solid waste management system,” he stated.

According to him, the state’s House of Assembly recently passed the plastic waste policy to address this issue once and for all.

Related Topics:environmentFeaturedLASGrainfallTunji Bello
Up Next