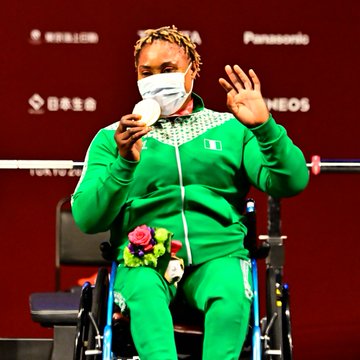 Nigeria has clinched her fourth medal at the Paralympic Games holding in Tokyo, Japan.

The Paralympics which commenced on August 24 will come to a close on September 5, 2021.

Omolayo is no stranger to breaking records, since her debut in 2014.

Not relenting, She smashed her previous World Record, by clearing 137.5kg in the same weight category at the 2015 All Africa Games in Brazzaville, Congo.

The former hairdresser-turned athlete smashed her own World record, setting a Paralympic Record in the Rio Paralympics 2016, by clearing the bar at 138kg to take Gold.

At the Para-Powerlifting African Championships in Algiers 2018, She broke the world record of 138.5kg that China’s Xu Lili had set on her way to gold at the Mexico City 2017 World Championships, by clearing the bar at 139.5kg.

Omolayo went a step further by defeating Xu Lili at the World Para-Powerlifting Championships in Nur-Sultan, Kazakhstan in 2019, taking Gold and setting a new 142kg record.

The 32-year old also smashed her own record at the Manchester Para-Powerlifting World Cup in March 2021 by clearing 142.5kg.

In the ongoing Paralympics event, She attempted 144kg to break Vera Muratova’s 143kg World Record set at the Dubai World Cup in June 2021, but failed.

The 41-year old Muratova finished bronze in this event.

Hopefully, there is enough time for Bose to smash another.

Ngige: Doctors want to be paid when not working; it’s illegal