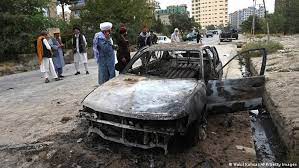 About five rockets were fired at Kabul airport early on Monday, a US official said, as the United States rushed to complete its withdrawal from Afghanistan to end its longest war.

Afghan media said the attack was launched from the back of a vehicle. The Pajhwok news agency said several rockets struck different parts of the Afghan capital.

According to Reuters, initial reports did not indicate any US casualties. The attack followed a huge Islamic State suicide bombing outside the airport gates on Thursday that killed scores of Afghans and 13 US troops and another reported attempted bombing on Sunday.

The US and allied forces have evacuated about 114,400 people, including foreign nationals and Afghans deemed “at risk”, in an effort that began a day before Kabul fell to the Taliban on August 15.

The forces themselves are due to pull out by a Tuesday deadline agreed with the Islamist militants.

US President Joe Biden reconfirmed his order for commanders to do “whatever is necessary to protect our forces on the ground” after he was briefed on Monday’s rocket fire, the White House said. He was told airport operations continued uninterrupted, it added.

On Sunday, Pentagon officials said a US drone strike killed a suicide car bomber who had been preparing to attack the airport on behalf of ISIS-K, a local affiliate of Islamic State that is an enemy of both the West and the Taliban.

US Central Command said it was investigating reports of civilian casualties.

“We know there were substantial and powerful subsequent explosions resulting from the destruction of the vehicle, indicating a large amount of explosive material inside that may have caused additional casualties,” it said.

It was the second such condemnation after a U.S. drone strike on Saturday killed two Islamic State militants in the eastern province of Nangarhar, in an attack the spokesman said had wounded two women and a child.

Afghans fearful of reprisals under Taliban rule continued to crowd the airport, appealing to foreign powers for a way out.

“We are in danger,” said one woman outside the airport. “They must show us a way to be saved. We must leave Afghanistan or they must provide a safe place for us.”

Two U.S. officials told Reuters evacuations would continue on Monday, prioritising people deemed at extreme risk. Other countries have also put in last-minute requests to bring out people in that category, the officials said.

As the evacuations wind down, a “far greater humanitarian crisis” looms ahead for the nation of 39 million people, the UN refugee agency warned.

Agency chief Filippo Grandi reiterated a call for borders to remain open and for more countries to share the “humanitarian responsibility” of accepting refugees with Iran and Pakistan, which already host 2.2 million Afghans.

“More resettlement options are sorely needed. They are critically important, not only to save lives but also as a demonstration of good will,” added Grandi, whose agency said last week that up to 500,000 Afghans could flee by year-end.

Oyetola: God, Osun People Will Decide My Fate In 2022