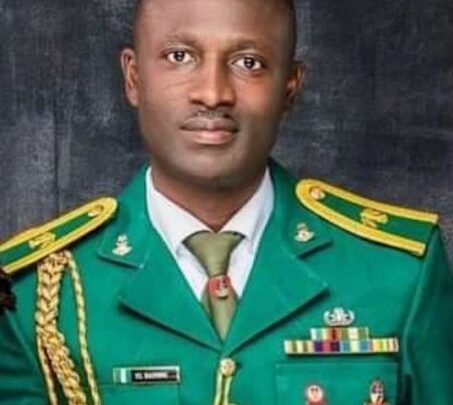 The Nigerian Defence Academy has finally spoken on Major Datong, who was abducted by gunmen during an attack on the school last week, saying security forces are still searching for him.

The bandits had around last week Tuesday, August 21 broke into the NDA permanent site and killed two officers and abducted Datong.

The academy had been silent since the incident about the whereabouts of the kidnapped Major.

But it said on Wednesday that the search was still on for him.

The NDA’s Public Relations Officer, Major Bashir Jajira, in a statement, following the visit of the Chief of Army Staff, Lt-General Faruk Yahaya, to the academy said the Army Chief commended the Commandant NDA, the GOC 1 Division, the Air Officer Commanding Air Training Command and heads of other security agencies in Kaduna State in the ongoing efforts to ensure the safe return of the abducted officer.

It read in part, “In his welcome address, the Commandant NDA briefed the COAS on the security breach into the Academy which occurred on 24 August 2021.

“He also expressed his appreciation to the COAS for his encouragement and support for the Academy before and after the incident, particularly the efforts being made to ensure the safe return of the abducted officer.

“He particularly thanked the COAS for upgrading the Academy Demonstration battalion to a full-fledged battalion, provision of six gun trucks to the Academy, posting in of more instructors and staff, and the provision of other numerous operational enablers to enhance the security of the Academy and its environs.

“The Commandant informed the COAS that these support measures have really boosted the morale of the staff and the security of the Academy.

“The commandant also briefed the COAS on the new security measures being taken in collaboration with 1 Division Nigerian Army, the Nigerian Air Force and other security agencies in Kaduna State to prevent any future security breach in the Academy.

“He assured that this incident has actually reinforced the cohesion of the entire Academy Community who have vowed to provide formidable support and prevent future occurrence.

“In his remarks, the COAS said he was in the Academy to obtain a firsthand brief on the recent security breach, and reassure the Commandant and staff of the Academy of the Nigerian Army’s support and solidarity in the fight against insecurity.

“The COAS further commended the Commandant NDA, the GOC 1 Division, the Air Officer Commanding Air Training Command and heads of other security agencies in Kaduna State in the ongoing efforts to ensure the safe return of the abducted officer.

“He assured the Academy that the Nigerian Army would also provide the Academy with additional operational enablers to further enhance the security of the Academy.