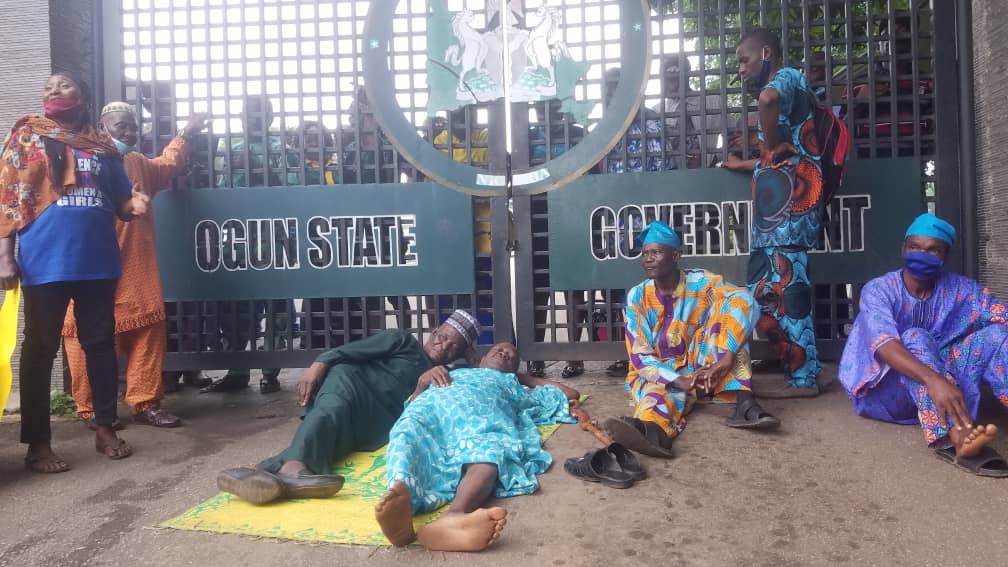 Local government pensioners in Ogun State have called on Governor Dapo Abiodun to increase their monthly pension, saying some of them still receive N3,000 as monthly pension.

The pensioners also demanded the payment of their 10-year outstanding gratuity, which they put at N68 billion.

Defying the morning showers on Wednesday, the aged pensioners marched to the Governor’s Office in Oke-Mosan, Abeokuta, but were denied entry.

The pensioners, under the aegis of Local Government Pensioners Association of Nigeria (LOGPAN), were armed with placards demanding their gratuities’

The placards read: “Gratuities are on sales to pensioners”, “Governor Dapo Abiodun, honour your father and treat pensioners well”. “Governor Abiodun, we don’t deserve this worst humiliation”, among others.

Speaking to newsmen, the State Chairman of LOGPAN, Sikiru Ayilara, lamented the alleged inhuman treatment meted out to retirees by the Abiodun administration.

Ayilara accused Abiodun of failing to keep his promises to the pensioners, regretting that they still earn paltry sums as pensions.

He described as a “wicked act”, the quarterly payment of N500 million to clear the outstanding gratuity, saying it would take 34 years to clear.

The chairman stressed that the association had written 13 letters to Gov Abiodun but alleged that the governor had remained recalcitrant and unyielding to their demands.

He said the payment of his members’ pension through the Ministry of Finance “is illegal”, instead, he requested that the Bureau of Local Government Pension be saddled with the responsibility.

“We have informed all the four paramount rulers in the state with no result. We have held six meetings with the SSG, Chief of Staff, Head of Service, Commissioner for LG and Chieftaincy Affairs, among other notable government officials.

“Governor Abiodun should honour us, grandfathers and grandmothers, by directing his personal attention to us for us to meet and find a lasting solution to the inhuman treatments being meted to us at our old age, leading to untimely death among us after serving the state for between 10 and 35 years.

“We demand immediate harmonisation of the pensions. Some of us still receive N3,000 monthly as a pension. We demand regular payment of our pensions as it was.”

Reacting to the allegations and complaints by the pensioners, the Secretary to the State Government, Tokunbo Talabi appealed to the protesting pensioners to be more patient with the government.

He said, “the government is currently experiencing hard times” as a result of the paucity of funds.

He, however, assured that the state government would look into the demands of the aggrieved senior citizens.