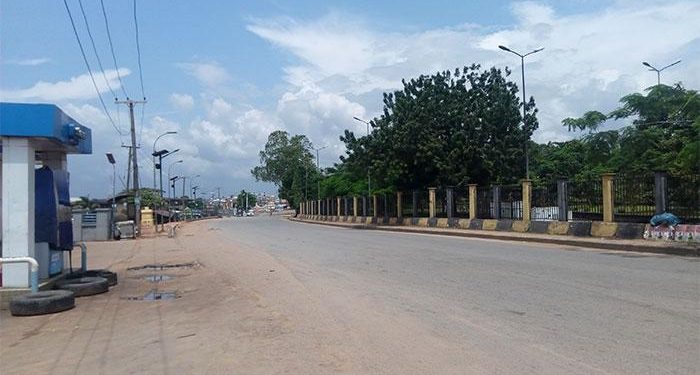 After the rampage of the unknown gunmen in Nnewi, Anambra State Sunday which left the offices of Directorate of State Service (DSS), Federal Road Safety Corp (FRSC) and country home of Mr Joe Igbokwe as well as many vehicles burnt, the level of compliance of the subsequent Monday stay-home order was one hundred percent.

The Sunday rampage where two lives were lost served as a warning to the residents who apart from closing Nkwo Nnewi markets, schools, offices and every other business also closed streets shops. Everywhere was totally deserted and even domestic animals left the streets as if they were also afraid.

Around 8:30am Monday it was rumoured that the unidentified gunmen were sited at Amuko Junction and a few moments later sources said soldiers with their amoured vehicles added to patrol vans landed at Nkwo Nnewi Triangle where they halted briefly and continued down Owerri Road and later turned back heading towards Old Nnewi-Onitsha Road. 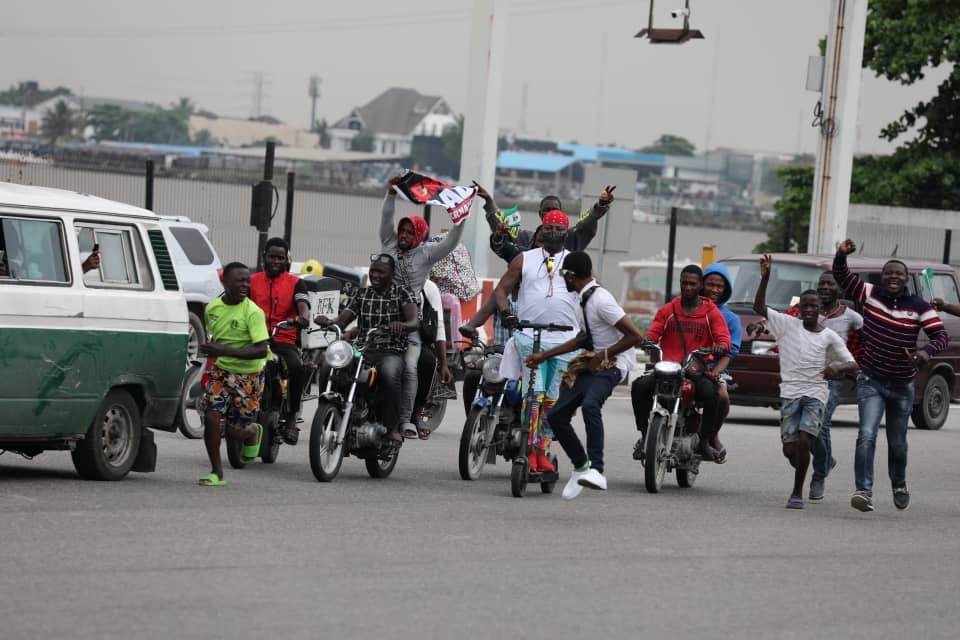 Youth group leaders, entertainers and activists on Wednesday staged protests in major cities of the countries including Lagos, Abuja and Enugu in memory of victims of last year’s #EndSARS protests against police brutality.

The police arrested at least two protesters at the Lekki tollgate in Lagos during the EndSARS memorial protest.

The police had repeatedly warned against the EndSARS memorial protest and deployed armed security operatives to the tollgate. But the organisers of the protest said there was no going back and some persons on Wednesday morning converged around the tollgate where protesters were forcefully dispersed exactly one year ago.

The arrests on Wednesday, it was learnt, were made by the armed police who had stormed the area to enforce no protest order earlier issued by the security authorities.

One of those arrested claimed to be a journalist and the other was seen carrying a placard.

Protesters in Lagos used their vehicles to protest, shouting that they want a better Nigeria.

In Abuja and Enugu, protesters reportedly stormed major streets, carrying different placards and shouting #Endsars and police brutality in Nigeria. Some of the inscriptions on their placards are “We will never forget 20-10-20”, “Endsars” and “End Police Brutality”.

Falz wrote via Twitter, “365 days ago, Nigerian citizens were shot and killed at the toll gate by our own military men.

“Today, we honour them because they have sacrificed their very existence for a cause bigger than all of us. They live forever in our hearts.”

Debo Adebayo, a comedian popularly known as Mr Macaroni was also one of those that led the EndSARS vehicular procession at Lekki tollgate.

The organisers had announced the procession on their Instagram handles on Tuesday.

“In memory of those who died that day and those we have lost to police brutality, we will: drive through the toll gate from 8-10 am; blast our horns in unison as we drive through and wave our flags,” the information on the e-flier read in part.

Around 9am, the entertainers joined by some youths rode in a convoy, waving flags at journalists and security operatives at the tollgate.

They said the procession was in memory of the EndSARS protest which ended controversially on October 20, 2020.

Lagos Commissioner of Police, Hakeem Odumosu, had said his men would only allow any procession of vehicles around Lekki, or any form of protest and had deployed officers in the area.

The arrested journalist told newsmen that he works with LegitTV and that his phone, driver’s licence and other documents were taken away from him.

He spoke from a Lagos State Task Force van where he was kept by the police, identifying himself as Abisola.

A report by the Punch said about 30 police trucks and armed personnel were stationed at the tollgate.

It also reported a car procession in honour of those believed to have lost their lives at the tollgate when soldiers dispersed the EndSARS protesters on October 20, 2020.

The Lekki tollgate was where many youths gathered day and night to air their grievances against police brutality and bad governance.

The protest was later said to have been hijacked by hoodlums, leading to destruction of private and public properties in other parts of Lagos. 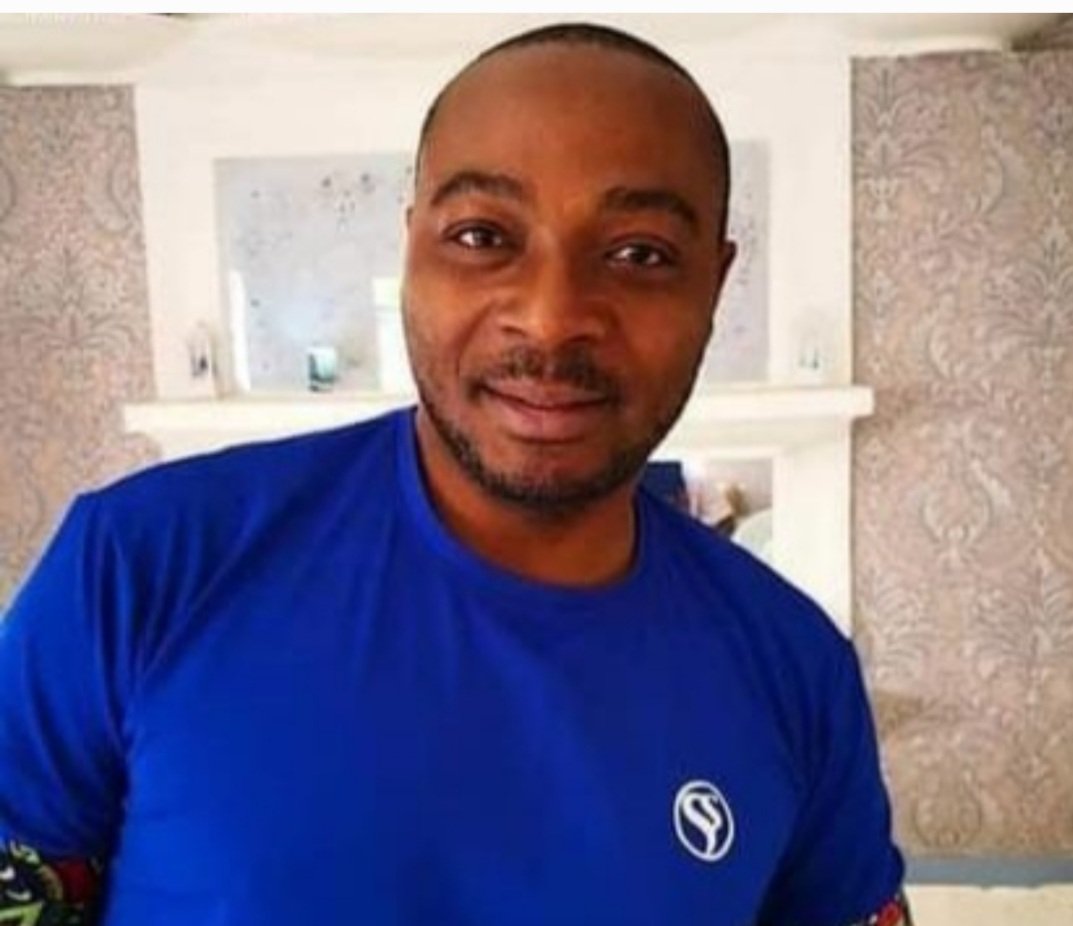 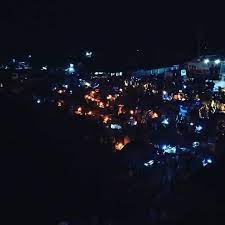 Scores of communities in Ogun State including Ota have been thrown into darkness after a heavy rainstorm wreaked havoc in the area.

The rainstorm, which occurred last weekend, destroyed many electricity poles and plunged the communities into darkness.

Some houses also had their roofs blown away by the storm just as many roads were flooded.

Residents of the affected areas are said to have been battling with a power outage since Saturday.

They said the power outage was making life more difficult for them and called on the Ibadan Electricity Distribution Company to rescue the situation.

The power distribution company has apologised to the affected customers for the inconveniences caused by the power outage.