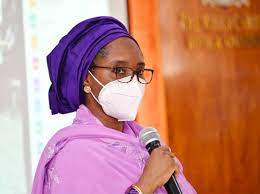 The Minister of Finance, Budget and National Planning, Dr. Zainab Ahmed, says lack of adequate revenue to finance both human and capital infrastructure should be the major worry of Nigeria, not the current debt it owes.

Ahmed made the remarks at the Public presentation and Breakdown of the Highlights of the 2022 Appropriation Bill to justify the current level of the federal government borrowing to finance the deficit of the budget.

She stated that with the federal government expected to spend N16 trillion in the proposed 2022 Budget, its expenses are minute to the combined over N100 trillion spent on the Nigerian economy.

She said at 21.6 percent borrowing for the 2022 Budget, Nigeria needs 50 percent of its current GDP to be able to have infrastructural development and growth that would translate into meaningful economic growth.

“What we have is a revenue problem and we are working on it to be able to fully fund the operations of government as well as be able to service our debt obligations.”

“Borrowings are essential for us to be able to continue to deploy necessary capital expenditures as well as human development.”

She added that the federal government has to borrow to spend more to invest in infrastructure as it would lead to more job creation, spending and taxes.

Why Nigeria’s debt exceeded 3 per cent of the GDP

“If you look at the Fiscal Responsibility Act, Section 41.1, it is clearly that the country can borrow for investing in capital expenditure and human development as long as the borrowing does not exceed 3 per cent of GDP.

“This year we have exceeded the 3 per cent by 0.39 per cent but this has been allowed in the Fiscal Responsibility Act. A provision that says that Mr. President can exceed the 3 per cent threshold where there is a national emergency. It is our collective view that the current security situation that we have, the need to properly address the economic conditions occasioned by the Covid-19 pandemic and the crash of crude oil crash qualify as national emergency.”

She added that exponential growth of Nigeria’s public debt was due to the spending made to come out fast from the two recessions the economy entered.

The Minister blamed spending to be made on defence and security for widening the fiscal deficit for the 2022 Budget.

“With the pervasive security challenges within the country, there is a need for sustained funding of the security services and this has necessitated massive expenditures in security equipment and operations and has contributed to the fiscal deficit. Defence and the security sector account for 22 per cent of the budget expenditure for 2022.”

A breakdown of the 2022 Budget would resort to N6.83 trillion spent on recurrent expenditure; N5.35 to go on capital expenditures and N3.61 trillion to be spent on debt servicing.

We must transform NNPC to global oil company – Buhari