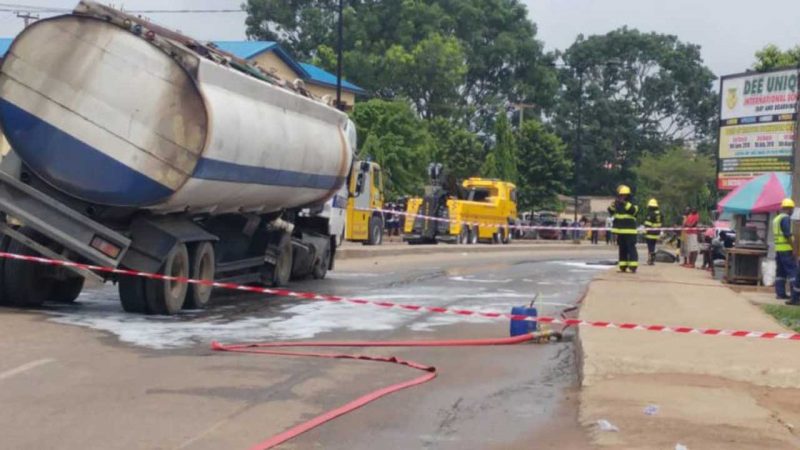 Motorists, commuters and residents around Stadium Bridge Surulere, Lagos, are in a panic mode over a possible fire explosion after a tanker carrying petrol fell and spilled its contents on the road in the early hours of Saturday at Alaka, inward National Stadium Bridge.

The incident, which happened around 4am, according to an eyewitness quoted by Vanguard, has led to a gridlock along the axis as the fallen tanker blocked the ever busy major road.

In a prompt response, men of the Lagos State Fire and Rescue Service, in collaboration with their Federal counterpart are currently salvaging the situation from a secondary incident.

The 45,000 litres tanker belonging to one of the major marketers in the oil and gas industry, was conveying PMS from a Lagos depot to an unknown destination when it involved in a lone accident resulting in the spillage of its contents.

Director, Lagos State Fire and Rescue Service, Mrs. Adeseye Margaret, while giving the update on the incident said, the situation is under control as of press time, 7.30 am.

According to Adeseye, “The situation is under control as the LASTMA officials had diverted traffic from both the fast and service lane to the outward bound lane.

“There are no traces of injury or death as none of the driver or assistants are in sight while mopping up and evacuation continues.”

The fire service boss, therefore, appealed to motorists to corporate and exercise utmost caution within the axis given the volatility of the products involved.