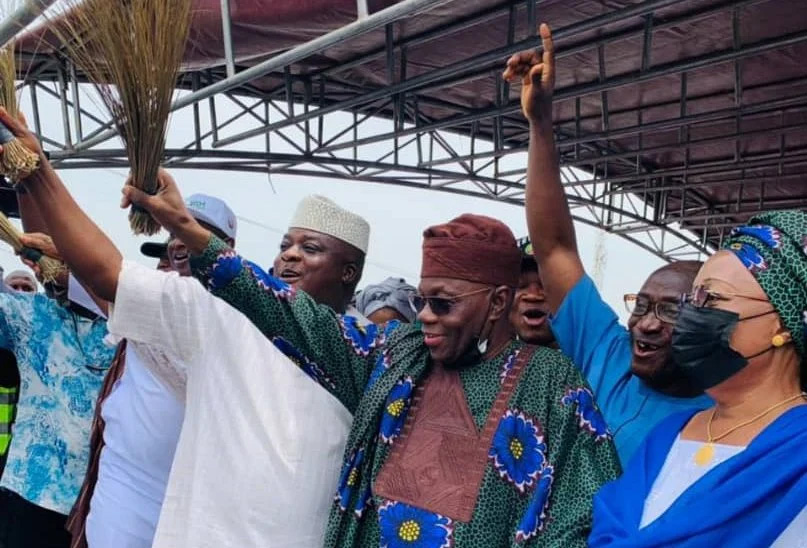 The lawmaker representing Oyo South Senatorial District at the Senate, Senator Kola Balogun, has defected to the All Progressives Congress.

Balogun, who is the Olubadan of Ibadan, Oba Lekan Balogun’s younger brother, was the only senator elected to the Upper Legislative on the platform of the Peoples Democratic Party in Oyo State in 2019.

The senator resigned from the PDP after Governor Seyi Makinde allegedly handed over the PDP ticker for Oyo South Senatorial District to Joseph Tegbe, who defected to the PDP from the APC.

Senator Balogun is already at the APC Secretariat in Ibadan with Senator Teslim Folarin, who is set to declare his governorship ambition at the same ceremony

Meanwhile, the Palace of Olubadan has distanced itself from the action of the monarch’s son, Femi, who was said to have visited Tegbe and declared support for his political aspiration.

This was contained in a statement by the palace.

The statement read, “The purported visitation of Femi Balogun, son of Olubadan of Ibadanland, Oba (Sen.) Lekan Balogun, to his schoolmate and a politician in the state, Mr. Olasunkanmi Tegbe, is a private and personal affair of Femi and has no blessings of the Olubadan palace.

“Femi, the Aremo Olubadan, was alleged to have endorsed the senatorial ambition of Tegbe during the visit, a position which is at variance with that of the Aliiwo Dynasty where the current Olubadan hails from.

“The Palace distances itself from the purported visit and endorsement of Tegbe by Femi and condemns such in view of the fact that the Aliiwo Dynasty which today sits on Ibadan throne also has a son, who currently serves as senator in the same senatorial district in person of Senator Kola Balogun and who still wishes to serve another term.

“As much as nobody can prevent Femi, being an adult, from holding a personal political view and democracy enjoins freedom of choice, the Palace frowns at the dragging of the exalted throne into such personal and unguarded visit and endorsement by a member of the family using the name of Olubadan.”

Related Topics:APCFeaturedoyoPDPsenator Kola Balogun
Up Next