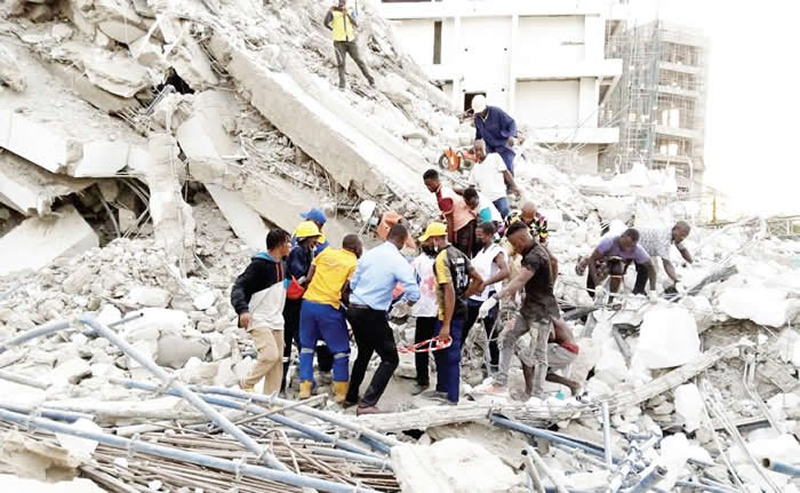 Forty-two persons have been confirmed dead in a 21-storey building that collapsed in the Ikoyi area of Lagos State last Monday.

Lagos State Governor, Babajide Sanwo-Olu, disclosed this on Saturday when he visited the site of the collapsed building in the company with Nasarawa State Governor, Abdullahi Sule, and Bola Tinubu, a chieftain of the All Progressives Congress (APC).

On Friday, the Lagos State Government told family members of victims of the building collapse to visit the Infectious Disease Hospital (IDH) at Yaba, to identify their relatives.

No official figure of how many people were in the building yet.

Speaking on Saturday, Sanwo-Olu said 15 survivors had been recorded so far.

He added that 49 persons said to be at the building before the collapse had been declared missing by their relatives.

“Now, we have a total of 42 bodies that have been recovered. We have nine survivors. However, there are additional six people that we have also been able to identify; they were on site. They were treated at the police hospital at Falomo,” the governor said.

“They have discharged some of them. We are getting all of the full records of the six additional survivors — that means a total of 15.”

The governor on Tuesday had  announced the indefinite suspension of Gbolahan Oki, the general manager of the Lagos State Building Control Agency (LASBCA).

“We will say that we had to take from the head, from the leadership of that agency.

“And you can rest assured that if there are other people that are found in the course of the investigation, they will face the full wrath of the law.”

Related Topics:FeaturedIkoyi building collapse
Up Next