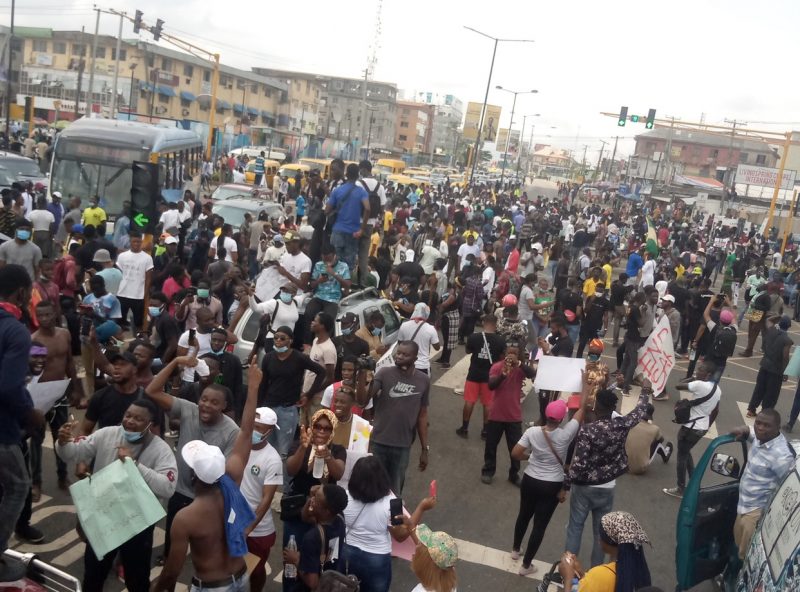 They vowed to return to the streets for a second wave of the #EndSARS protest, adding that no amount of intimidation by the government or security agencies would stop their demonstration.

Some prominent members of the #EndSARS campaign had their bank accounts frozen by the Central Bank of Nigeria (CBN) on Friday, just as some were said to have been stopped from travelling out of the country.

As a teaser, the youth representatives on the Lagos panel investigating alleged police brutality and recent shooting of Lekki protesters boycotted the panel’s proceedings on Saturday, an action that made the team to suspending the day’s sitting.

A Federal High Court judge had ordered the bank accounts of some youth leaders to be frozen for a period of 90 days, pending the outcome of investigation and inquiry currently being conducted by the apex bank.

Many of those affected were said to be prominent during last month’s nationwide protest, which attracted global attention.

An activist, Aisha Yesufu, said, “The CBN did not block the account of the numerous SARS officers that were alleged to have extorted money from the citizens at gunpoint, forcing them to transfer money to their accounts but it blocked the account of those who protested the extortion and killings by SARS officers.”

The Lagos State Police Command has vowed to resist any form of planned protest or gathering in the state, warning that the government and people were still nurturing the wounds of the recent Endsars violence.

The state police command has the full backing of the Inspector General of Police, Adamu Mohammed, who has ordered the police across the country to use force to quell any form of violence or attack by any group or individuals.

Lagos Commissioner of Police, Hakeem Odumosu, said in a statement, “The command wishes to inform the general public that based on intelligence gathering from relevant intelligence agencies, some unpatrioric elements or group of people have concluded plans to orchestrate another set of violence in the state in furtherance to the recent Endsars violence, which has been analysed as dangerous and counterproductive.

“Premised on this, the command, therefore, wishes to warn any individuals, group of students or any groups who might want to stage any form of protest, either ‘peaceful’ or violent, or gathering whatsoever, to desist as the police and other security agencies will collectively and tactically resist any security threats or threats to public peace which might be triggered by protest or protesters in Lagos State.

“The police command, emphatically, warns parents and guardians to discourage their children or wards from embarking on any protest in the state as the possibility of hijacking it by armed hoodlums to cause grief and pains like the recent past is evident.”

Lagos State Government asked #EndSARS protesters to heed the warning of the police or be ready to face the consequences of disobedience.

In a statement on Friday, the state Commissioner for Information and Strategy, Gbenga Omotoso, said, “Any person or group of persons who plans to fuel any crisis in Lagos should drop such thoughts or be ready to face the law.”

He urged anyone who had grievance against the police to approach the judicial panel of inquiry.

According to him, the state is “battling to recover from the shock of the carnage unleashed by hoodlums who hid under the #EndSARS protests.”

“Even as we are still counting our painful losses in lives and property, there are hints of a new protest. The police have warned that no protest will be tolerated,” he said.

Omotoso also said, “Any protest under any guise will be disrespectful to the memory of those who died in the violence and unfair to ordinary Lagosians, who have remained peaceful, despite the hardship that the original protests sparked.

“It is clear that the original protests, despite their good intentions, have caused more havoc than they were planned to resolve.

“The government hereby appeals to our patriotic youths to shelve any plan for a protest and join the practical efforts to find a solution to the problems that have been thrown up by the actions taken in recent weeks.

“Anybody who has any grievance against the disbanded SARS should approach the Judicial Panel of Inquiry and Restitution to make his case.”

Trump says election ‘far from over’, vows to contest results