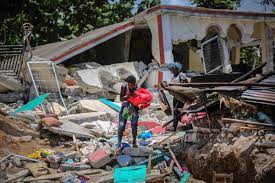 The death toll from the magnitude 7.2 earthquake that rocked Haiti, on Saturday, has risen to 1,297.

The ministry of communications in Haiti, confirmed the figure at a briefing on Sunday evening.

Rescue efforts are ongoing, but there are concerns that health facilities may be overwhelmed as a result of the number of injured persons seeking medical attention.

While commending the efforts of persons assisting with the rescue efforts — including volunteer health workers — Ariel Henry, prime minister of Haiti, while speaking on the latest development on Sunday evening, appealed for assistance.

“We need humanitarian, health and logistical assistance to shelter the victims. People are in a really difficult situation. We must act quickly,” he said.

Security agencies, including the Haitian armed forces, have been deployed to affected areas to clear the access roads in order to ensure smooth transport of victims to health facilities.

According to the United States Geological Survey (USGS), the earthquake erupted five miles from the town of Petit Trou de Nippes in the western part of the country, about 80 miles west of Port-au-Prince, the country’s capital.

The Saturday earthquake is the first major incident of its kind in over 10 years.

Related Topics:Haiti earthquake
Up Next