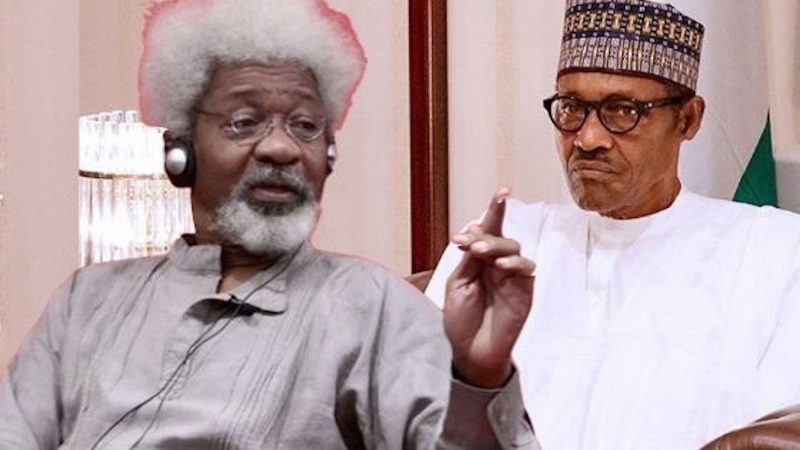 He described the kidnapping of scores of students from Government Science Secondary School, Kankara, Katsina State as “a slap across the face of the Commander-in-Chief”.

His comments on the security challenges confronting the country are contained in a statement on released on Monday titled “INFRADIG – A presidential comeuppance.”

The playwright said the nation was at war considering the latest abduction of pupils reminiscent of the kidnap of Chibok schoolgirls in Born State on April 14, 2014.

Soyinka said, “If only this latest outrage were a personal contest of slights between insurgency and power – alas, its resonance is felt far beyond! It is merely the latest in the serial stinging slaps across the face of the nation, and it draws blood from every sensing citizen. Over five years since Chibok, we have yet to anticipate, and to guard against a repeat. We continue to hand over innocent wards cheaply, en masse, to the agents of darkness and despair.

“A government refuses to accept that, as indicated several times over, the nation is at war. At war within itself, and that it requires drastic measures, away from spasmodic responses after the dread deed, if there is any will left over to salvage what is left of nationhood. The appropriate expression here is “thinking outside the box.”

He also condemned the usual responses to genuine calls on government for action against insecurity.

He said, “When others do, they deserve better than to be rewarded with banalities such as: The government will not be stampeded. The presidency will not be blackmailed. Stop politicizing the issue. The president is committed to preserving the integrity of the nation. We will not be bullied into abandoning our commitment to national unity The sovereignty of the nation is non-negotiable…. and so on and on, ad nauseam.

“Has anyone been detected marching to a contrary tune? Sure, we are assailed with such minority rhetoric from time to time but, is “unity” what is profoundly at stake? Does such predictable rhetoric remotely touch upon the existential anxiety of millions of humanity? Or are we confronted, at its most primary level, with a growing question of the ability of the nation to even feed herself?

“When defenceless farmers are set upon – what does it matter if it is fifty or a hundred? – are butchered in one fell swoop, harvesting their crop, does the sheer suggestion that they met their deaths because they did not seek military cover not speak to the parlous state of a nation, and her need to urgently “think outside the box”? What is tragically demonstrated daily in all departments of citizen survival is the need to overhaul the nation’s structural existence – beginning, obviously, with the imperative of guaranteeing that very existence. The rest is waffle. Vaseline massage on malignant tumour. National Infradig! Again, the nation laments – and waits.”