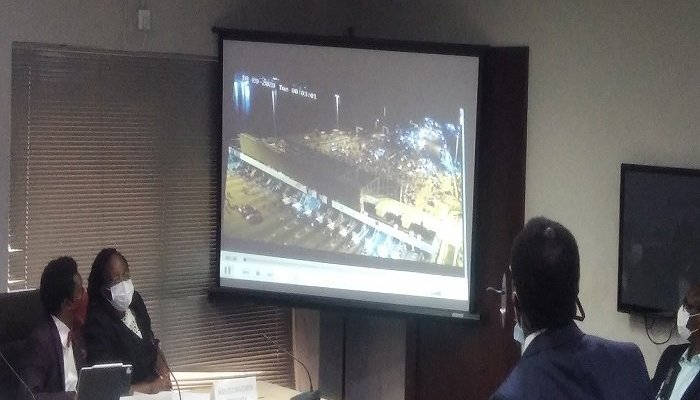 The panel is saddled with the responsibility of investigating cases of brutality and human rights violations committed by operatives of the disbanded Special Anti-Robbery Squad (SARS).

The panel at its sitting in Lekki on Friday obtained footage of the incident from the Lekki Concession Company (LCC).

The chairperson of the panel, Doris Okuwobi, granted approval for the footage to be played after hearing from counsels.

Meanwhile, some Nigerian students stormed venue of the panel sitting to protest the killing of Pelumi Onifade, a journalist, who was killed by police officers attached to the Lagos State Task Force.

Onifade, a 200-level student of the Department of History at Tai Solarin University of Education, Ijagun, Ogun State, was on October 24 reporting the crisis between the police and some thugs as an intern with Gboah TV when he was arrested by the task force team in Oko-Oba, Agege, Lagos.

He was later found dead at a mortuary in Ikorodu.

His colleagues, who were protesting his death, said the police team led by Yinka Egbeyemi should be sacked and made to stand trial for murder in a competent court.

“Pelumi was arrested, the task force team kept him away from his people.

“After some days, Egbeyemi called us for a meeting and the task force asked us to check a mortuary in Ikorodu where we found the corpse of Pelumi,” said Shoneye Abdulazeez, Students’ Union President of TASUED, who spoke on behalf of the protesting students.

He added, “The Nigerian state knew Pelumi has the record of the shooting and illegality they perpetrated, they had to kill him to cover their tracks.”

The students also asked that the state government disband the task force since it had become notorious for carrying out indiscriminate arrest, unlawful detention and killing of citizens.

Onifade’s family has called for an investigation into the circumstances surrounding his death, urging that police officers involved in the killing of Onifade be brought to book.