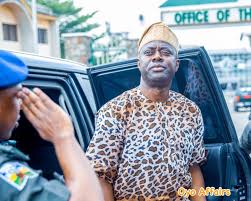 The Governor of Oyo State, Seyi Makinde, has said the Oyo State Security Network Agency, co-denamed Amotekun Corps is the state’s local response to crime and criminality and that it ready to crush all criminals operating in the area.

He also stated that the South-West was ready to combat crime through the security agency, which was initially launched in January 2020.

A statement by the governor’s Chief Press Secretary, Taiwo Adisa, quoted Makinde as saying this at the passing-out parade of the 1,500 pioneer Amotekun corps, held at the Emmanuel Alayande College of Education, Oyo.

He added the six states of the region would fight common enemies and those elements that might attempt to cause commotion and perpetuate crime in the region.

He highlighted the efforts of his government in improving the security sector by supporting the federal security agencies in the state with the provision of patrol vehicles, communication gadgets and other logistic support.

He added that the approval and establishment of a Police Mobile Force 72 Squadron at Ago-Are, Oke Ogun area of the state by the Inspector-General of Police, Mohammed Adamu, as well as provision of vehicles and logistic support for the squadron was another step taken by his administration to boost security, adding that the government has equally requested for another Police Mobile Force base in Oyo town.

Makinde, who noted that state policing remained the way forward to tackle insecurity in every nook and cranny of the country, said the Amotekun initiative by the South-West was the next best thing in the absence of state police.

According to him, it will help to fight crimes in the nooks and crannies of the society.

He, however, expressed confidence that advocates of state police would one day get enough support at the national level to achieve the constitutional review.

He urged the corps to exhibit the highest level of professionalism in the discharge of their duties, adding that none of them must be seen harassing individuals.

The governor also stated that the agency would also be involved in routine day and night patrols on major roads and remote areas, as its members drafted to all the 351 wards in Oyo State.

He also told the gathering that the 2021 budget of the state had been approved by the state’s executive council, adding that he would present it to members of the state House of Assembly next week.

The governor said, “As I said during the official launch of this outfit in January 2020, our regional integration, through Amotekun, should be seen in one light. We are coming together to fight a common enemy. That enemy is not Nigeria; the enemies are the elements among us and their affiliates, who are determined to cause commotion within our states’ borders and threaten our peaceful coexistence.