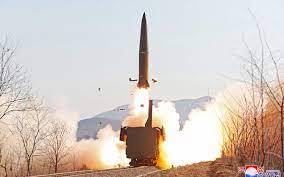 North Korea on Friday fired what appeared to be two short-range ballistic missiles in its third weapons launch this month, officials in South Korea said, in an apparent reprisal for fresh sanctions imposed by the Biden administration for its continuing test launches.

The missiles flew 430 kilometers (267 miles) cross-country on a maximum altitude of 36 kilometers (22 miles) before landing in the sea, the military said.

Japan’s coast guard urged vessels to pay attention to falling objects, but Chief Cabinet Secretary Hirokazu Matsuno said there were no reports of damage to vessels or aircraft.

The test-launch of a hypersonic missile on Tuesday — the second in a week — was overseen by leader Kim Jong Un, who said it would greatly increase his country’s nuclear “war deterrent.”

North Korea has been ramping up tests of new, potentially nuclear-capable missiles designed to overwhelm missile defenses in the region. Some experts say Kim is going back to a tried-and-true technique of pressuring the world with missile launches and outrageous threats before offering negotiations meant to extract concessions.

Following an unusually provocative run in nuclear and long-range missile tests in 2017 that demonstrated the North’s pursuit of an arsenal that could target the American homeland, Kim initiated diplomacy with former President Donald Trump in 2018 in an attempt to leverage his nukes for economic benefits.

But the negotiations derailed after Kim’s second summit with Trump in 2019, when the Americans rejected his demands for major sanctions relief in exchange for a partial surrender of the North’s nuclear capabilities.

Kim has since pledged to further expand a nuclear arsenal he clearly sees as his strongest guarantee of survival, despite the country’s economy suffering major setbacks after it shut its borders during the pandemic as well as persistent U.S.-led sanctions.

U.K. accuses Russia of scheming to install a pro-Kremlin government in Ukraine 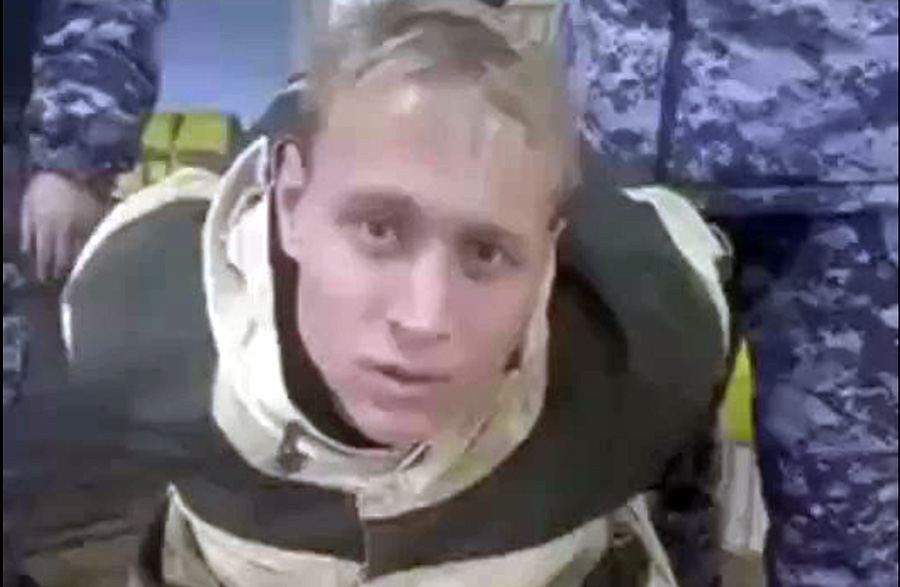 Zinin After His Arrest

Ruslan Zinin, a Russian man, shot the leader of a local military enlistment committee in Irkutsk, Siberia, a vast Russian province encompassing most of Northern Asia, after his friend was drafted for the war in Ukraine.

According to The Moscow Times, Zinin, 25, shot Alexander Yeliseyev, the recruitment officer at close range on Monday in protest of his friend’s forceful conscription into the Russian army, sending others scampering for safety at the hall used for the exercise.

The incident is one of the most dramatic instances of outrage, resistance and displeasure from Russians over Vladimir Putin’s decision to draft around 300,000 reservists from Russian provinces as the battle in Ukraine continues.

Igor Kobzev, the governor of the region, said Yeliseyev had been critically wounded and was now fighting for his life as a result of the shooting.

According to Marina Zinina, Zinin’s mother, her son became very upset when his friend, who remains unnamed, allegedly received draft papers without any prior military experience, and despite Russia’s pledge to strictly recruit experienced reservists.

“Ruslan (Zinin) himself did not receive summons, but his best friend did yesterday,” Zinina said.

Zinin was said to have stormed the recruitment centre yelling “no is going anywhere” before going on a shooting rampage. He has been arrested by local authorities.

Since Putin made the additional conscription announcement on September 21, close to 20 recruitment offices have been torched across Russia’s many provinces.

Thousands of Russians have also stormed the streets in protest of the announcement, leading to more than 100 police detentions.

Also, on Monday, a man in the western city of Ryazan, set himself on fire at a bus station while saying he did not want to take part in the war in Ukraine. 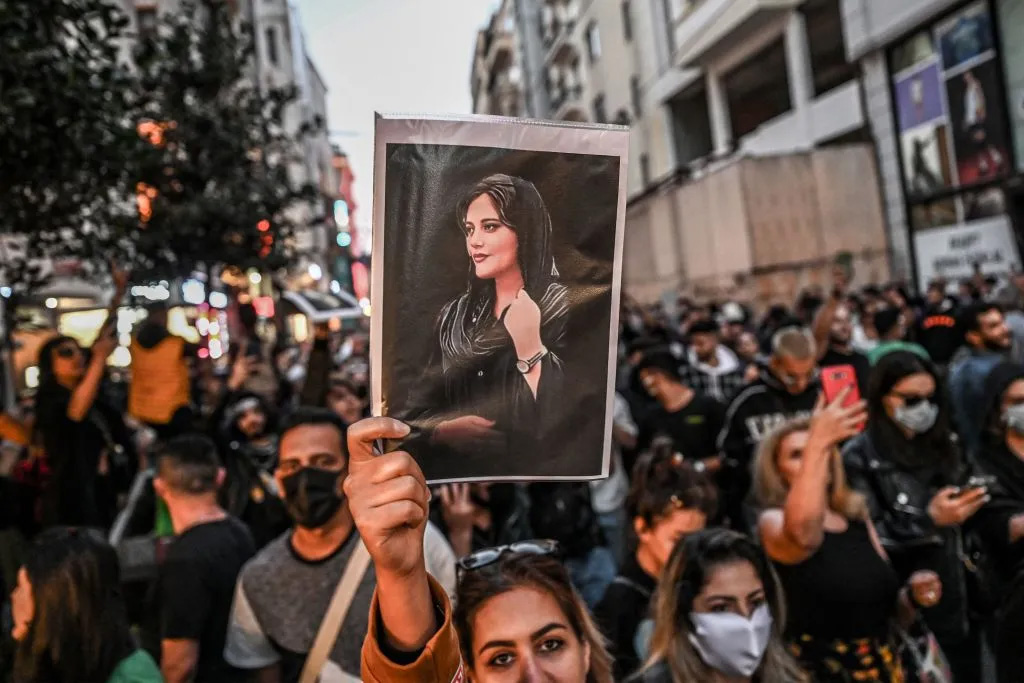 The President Ebrahim Raisi-led Iranian government has restricted internet access in parts of the country amid growing protests.

Since the death of 22-year-old Mahsa Amini, who succumbed to injuries inflicted on her by the Iranian morality police for allegedly wearing her headscarf loosely, protests have swept through parts of the country.

Reacting, riot police went after protesters, inflicted injuries, made arrests and had a hand in the death of over 41 protesters.

An internet observatory study by Netblocks revealed that there had been restrictions on internet service and social media platforms since Monday, September 19. Amini died on September 16.

According to Netblocks, there was “a near-total disruption to internet service in parts of Kurdistan province in west Iran from the evening of Monday 19 September 2022”.

“The regional telecommunications blackout in and around Sanandaj follows a partial disruption to internet service in Tehran and other parts of the country on Friday when protests first broke out. Instagram and WhatsApp, two of the last remaining international platforms in Iran, have subsequently been restricted nationally as of Wednesday 21 September, followed by a nation-scale shutdown of mobile networks,” Netblocks said. 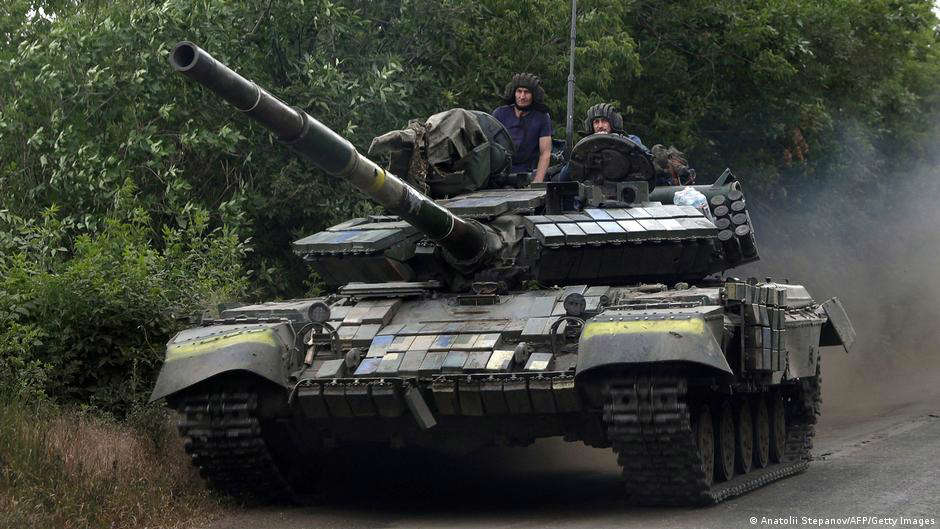 Ukrainian forces, which were forced out of Luhasnk in July, have vowed to retake the region

Ukrainian forces have said they are making gains in the direction of Luhansk. Meanwhile, British intelligence has said Russia “almost certainly” moved parts of its submarine fleet out of Crimea. DW rounds up the latest.

Ukraine said its troops are continuing to make gains moving eastward toward the Russian-occupied Donbas region, setting the stage for a push to potentially recapture parts of Luhansk province.

Ukraine’s Luhansk provincial Governor Serhiy Gaidai said Ukrainan troops had retaken the village of Bilohorivka, a suburb 10 kilometers (6 miles) west of the city of Lysychansk, which fell to Russian forces after fierce fighting in July.

Although the reports could not be independently verified, the capture of Bilohorivka would mean Russia no longer has full control of Luhansk province. Lysychansk was the last Ukrainian city in Luhansk to fall after the Russian summer offensive in the region, which had been touted as a major victory by Moscow.

Gaidai said Ukrainian forces are preparing to take the remainder of Luhansk province from Russian occupiers.

“There will be fighting for every centimeter,” Gaidai wrote on Telegram. “The enemy is preparing their defense. So we will not simply march in,” he added.

“The occupiers are clearly in a panic,” Zelenskyy said in a televised address late on Monday, adding that he was now focused on “speed” in liberated areas.

On Tuesday, Russian-installed officials in Luhansk claimed that a Ukrainian strike on Krasnorichenske, a village some 30 kilometers (19 miles) north of Lysychansk, killed seven civilians.

Russia has moved a sizable chunk of its Black Sea Fleet submarines away from Crimea in the wake of attacks on Russian naval bases and other military installations in the region, according to the British Ministry of Defense.

“This is highly likely due to the recent change in the local security threat level in the face of increased Ukrainian long-range strike capability,” it said in an intelligence update on Tuesday.

Former Russian President Dmitry Medvedev — who is currently deputy chairman of Russia’s Security Council — said on Tuesday it is “essential” that the separatist Donetsk and Luhansk People’s Republics hold referendums in order to join the Russian Federation.

Medvedev said on social media that joining Russia would be vital to protecting their interests because it could further justify Russia’s use of military force against Ukrainian troops in the Donbas.

British Prime Minister Liz Truss announced on Tuesday morning that the UK next year would meet or exceed the €2.62 billion pound ($2.63 billion) military aid spent on Ukraine in 2022.

In a statement, Truss’ office said this future military support would likely include multiple launch rocket systems to be used on the battlefield.

“My message to the people of Ukraine is this: the UK will continue to be right behind you every step of the way,” she said. “Your security is our security.”

German Foreign Minister Annalena Baerbock said that this week’s United Nations General Assembly, which is due to begin on Tuesday, would not be “like the previous ones.”

Ahead of the meeting in New York City, Baerbock said Russia’s invasion of Ukraine attacked the principles upon which the UN was founded.

Baerbock said her focus at the meeting would be on “how to deal with and prosecute the horrific crimes committed in Ukraine in Russia’s name.”

“It takes the United Nations for us to find common solutions to global problems,” she added. “No country should have to live in fear of a stronger neighbor attacking it.”

DW reports on the threat of a nuclear disaster and other developments from the weekend.

Amid comprehensive sanctions from the West, Russia has attemped a second economic pivot towards Asia.

DW looks at why this new strategy hasn’t paid off at recent leaders’ conferences.