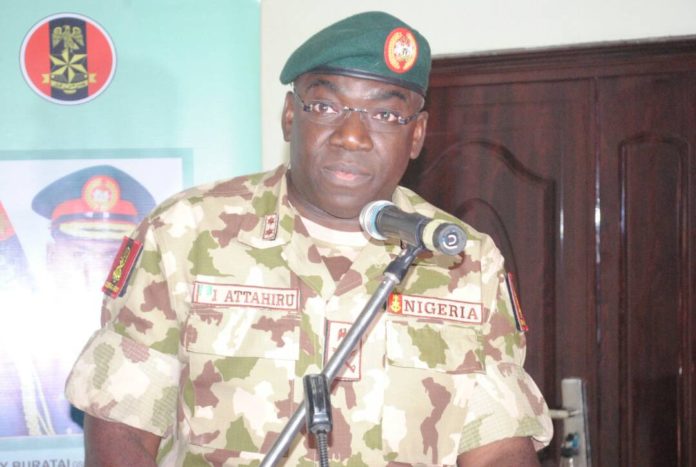 An army officer and 10 other soldiers have been killed in Benue State while on a routine operational task, the Nigerian Army has said.

Unconfirmed reports also indicated that over 50 civilians were killed and 200 houses burnt following an invasion of Konshisha Local Government Area of the state by troops.

A statement issued by the spokesman for the Nigerian Army, Brigadier General Mohammed Yerima, said following the killings, the Chief of Army Staff, Lt. General Ibrahim Attahiru, had ordered commanders on the ground to fish out and deal decisively with the criminal gangs responsible for the crime.

It stated, “Nigerian Army (NA) troops operating in Benue State came under attack while on routine operational task. The troops comprising one officer and 10 soldiers were initially declared missing, which prompted the deployment of a joint search and rescue team comprising NA troops and personnel of Operation Whirl Stroke.

“The search and rescue team unfortunately found all the missing troops dead in Konshisha LGA of Benue State. “While the bodies of the slain troops were evacuated immediately, efforts are ongoing to track down the perpetrators of this heinous crime with a view to bringing them to Justice.”

The statement said the Nigerian Army under the leadership of the Attahiru remained resolute in ensuring stability in Benue State as well as other parts of the country that were affected by the activities of criminal gangs.

It said the army was determined to ensure that the unprovoked attack did not disrupt the general peace being enjoyed by the local inhabitants.

“The COAS, has therefore, directed commanders on the ground to ensure sustained efforts in order to fish out and deal decisively with these bad elements who are threatening the peace in the area”, it said.

The statement recalled that Benue State, which was a hot bed of violent clashes had enjoyed relative peace following the successes achieved by the various security agencies who have been working tirelessly to safeguard law abiding citizens and ensure they go about their legitimate business without fear of harassment by criminals.

It appealed to the public to volunteer useful information that would lead to the arrest of the perpetrators of the dastardly act.