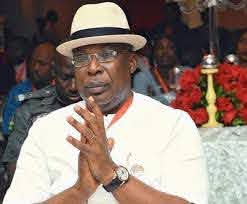 Minister of State for Petroleum, Timipre Sylva, has asked Nigerians to hold him accountable “for every dollar, every cent” spent on the Port Harcourt refinery.

He said President Muhammadu Buhari was determined to leave behind a legacy of functional refineries for Nigerians.

On Wednesday, the Federal Executive Council at its weekly meeting approved $1.5 billion for the rehabilitation of the Port Harcourt refinery.

Nigeria’s four refineries — two in Port Harcourt and one each in Kaduna and Warri — has a combined capacity of 445,000 barrels per day. None is currently functioning, having been shut down in 2020.

But the minister, who spoke on Sunday during a Channels Television programme, said the Buhari administration means well.

“They (Nigerians) can hold me accountable and hold this government accountable for every dollar, every cent on this refinery and ensure that we deliver a refinery that works,” he said.

“What President Muhammadu Buhari wants to leave as a legacy are refineries that are functional.

“That is really where we are looking at because what is going to happen to those refineries will be decided by Nigerians and future administration.”

The minister said the rehabilitation would take 18 months and the first phase take the refinery to 90 per cent operational capacity.

“We’re not lying to Nigerians. We’ve told you that this is going to be in three phases and the first phase is definitely going to be within the tenure of this administration,” he said.

Sylva gave a breakdown of how the government intended to source the $1.5 billion required to repair the refinery.

“NNPC is going to spend about $200 million from its internally generated revenue sources, while the federal appropriation will put in about $800 million and it is already broken down into three parts.

Sylva said the rehabilitation of the refinery was “one way the government can generate revenue to invest in other sectors of the economy”.

He said it would benefit Nigerians and be commercially-viable “to produce profits for the government”.

The minister said, “This rehabilitation will bring a lot of gains for Nigerians. First, we are gaining from savings in the foreign exchange end, savings from importation of premium motor spirit (PMS); and we will gain from the operations of the refineries itself.”

He also said, “This refinery plus Dangote’s refinery, Kaduna refinery and Warri refinery will more than satisfy Nigeria’s requirements.”

He added, “We are headed to a point where Nigeria will become a net exporter of refined petroleum products. So we will be able to satisfy Nigerians and also have excess in exporting these products.”