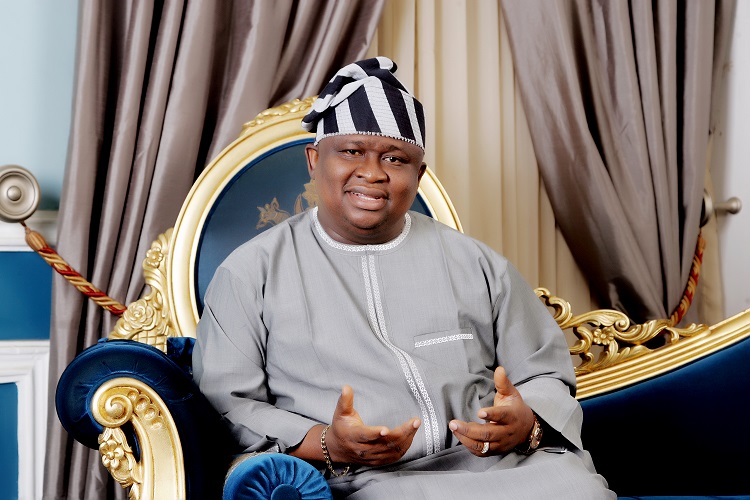 The Lagos West Senator, Olamilekan Adeola (Yayi), says his return to Ogun State politics, after about 20 years in Lagos State, started on a rough note due to stiff resistance from his kinsmen and some political leaders.

Adeola, who is now seeking to represent Ogun West at the senate, said this on Saturday in Ilaro, Yewa South Local Government Area, shortly after he was conferred with a top chieftaincy title, Aremo of Yewaland.

The conferment was part of the 10th year coronation anniversary of the Olu of Ilaro and Paramount Ruler of Yewaland, Oba Kehinde Olugbenle, on Saturday.

The Senator who spoke with newsmen at the event said it was a rough battle switching his political base from Lagos to Ogun.

Adeola, however, said what started on a rough note “is now as smooth as ever” because his people have embraced and showed him love.

Last week, a group presented him with the N20million APC senatorial nomination form to him, where he broke down in tears.

Speaking against the backdrop, he said “It was least expected. When I made my initial approach to return back home, I was faced with a lot of challenges from my people.

“Now, if my people now turn around and appreciate me to the extent of putting money together to buy my form for me, I believe it is a big deal and I sincerely appreciate them. We started rough but now it’s as smooth as ever.”

He said the Aremo of Yewaland title bestowed on him was not politically motivated, but rather an appreciation of his contribution to the development of the region.

“I strongly believe that this chieftaincy title is not politically motivated. I just believe it is in appreciation and the belief in me by my people that I can do everything that’s humanly possible to contribute my own quota to the development of the land.

“So, when it comes to politics, I strongly believe that that is a different ball game and different terrain entirely.”

On the challenges of development in Yewaland, Adeola said he knows where the shoe pinches and he would leverage on his legislative experiences to bring meaningful development to the region, if elected as Ogun West Senator.

In his remarks, Governor Dapo Abiodun told Adeola and other honourees that the chieftaincy title bestowed on them was a call to duty and they could not afford to fail.

He also applauded the Olu of Ilaro and paramount ruler of Yewaland, Oba Kehinde Olugbenle on his tenth anniversary on the throne of his forefathers. 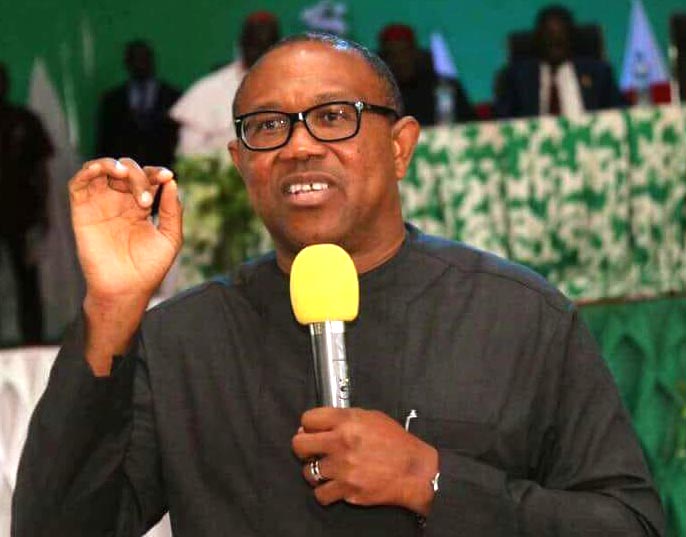 The National Publicity Secretary of the Labour Party, Abayomi Aranbambi, confirmed the development of Daily Trust on Saturday night.

The Manifesto sited by Daily Trust however promises seven key priority areas that were needed to jump start the economy and move the country from Consumption to production.

Some of the priority areas according to the pact includes to secure the country, end banditry and insurgency; and unite the country in such a way “that no one is left behind.”

Obi also promised to “Shift emphasis from consumption to production by running a production-centered economy that is driven by an agrarian revolution and export-oriented industrialization.

” Restructure the polity through effective legal and institutional civil service. Leapfrog Nigeria into the 4th Industrial Revolution (4IR), through the application of scientific and technological innovations to create reforms to entrench the rule of law, aggressively fight corruption, reduce cost of governance, and establish an honest and efficient a digital economy.

Others, according to the document promises, are enhancing the human capital of Nigerian youths for productivity and through integrated public-private partnerships and education.

The Labour Party presidential candidate also promised to conduct “an afro-centric diplomacy that protects the rights of Nigerian citizens abroad and advance the economic interests of Nigerians and Nigerian businesses in a changing world.”

‘Jonathan Turns Down Request To Resolve Atiku/Wike Feud, Yet To Forgive Atiku’ 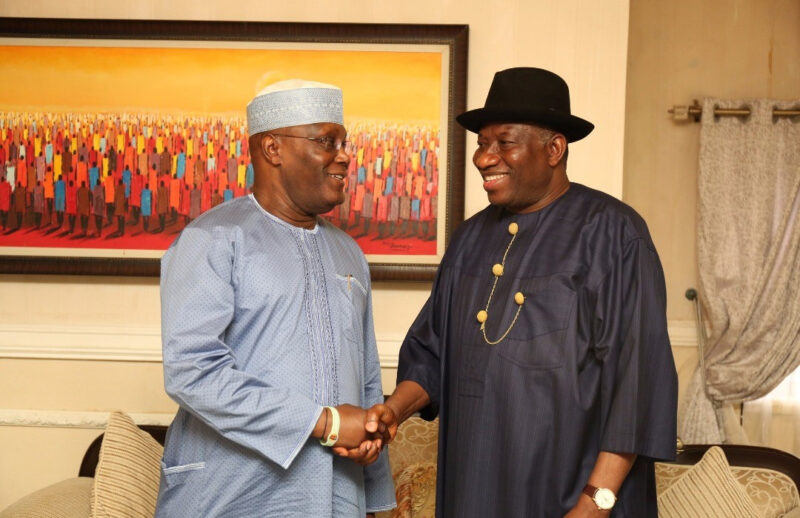 The former president of Nigeria, Goodluck Jonathan has reportedly turned down the move to reconcile the presidential candidate of the Peoples Democratic Party (PDP), Atiku Abubakar and the G-5 Governors.

There had been reports that the leadership of PDP are seeking the help of Jonathan to resolve the crisis in the party ahead of the 2023 general election.

The move seems to have collapsed after the former president reportedly refused to be involved in the crisis.

Recall that Atiku, his running mate, Ifeanyi Okowa and some party leaders a few weeks ago had met with Jonathan at his residence in Abuja.

Naija News learnt that they requested the support of Jonathan in the 2023 presidential election.

A few days after Atiku visited the former president, Wike disclosed how the former vice president in 2015 refused to support Jonathan.

Wike also revealed how Atiku insisted that Jonathan should relinquish his presidential ticket in 2015.

Following Wike’s allegations against Atiku, the camp of the former Vice President has not denied nor confirmed the statement.

A close ally of Jonathan who spoke with Saturday Sun on condition of anonymity said the former president is yet to forgive Atiku for working with some governors in 2015 to humiliate him, despite his plea.

The source said even though Wike would listen to Jonathan, the former president believes Atiku only comes to him every four years when he is seeking the presidential seat.

According to the source, Atiku in 2019 also snubbed and refused the people Jonathan suggested for Atiku’s campaign organisation in the 2019 presidential election.

The source said the former vice president only visited Jonathan before the primaries in 2019 and snubbed him after securing the party’s presidential ticket.

The source said, “Atiku doesn’t have any regard for Jonathan. He’s one of those who believe strongly that Jonathan didn’t deserve to be president. Even as president, Atiku didn’t respect Jonathan. That has not changed.

“He’s only showing some courtesy now that his election bid is threatened. In 2019, Jonathan supported Atiku against the wish of his supporters who were opposed to such support, including Wike.

“As soon as Atiku secured the ticket, he suddenly started ignoring Jonathan and even refused to accommodate the people, the former president nominated to serve as members of the campaign organisation.

“Since Atiku lost in 2019, he has not deemed it fit to reach out to Jonathan. The former president doesn’t want to be used again. So, he has politely refused to help Atiku. Even Olusegun Obasanjo is unwilling to step in too.” 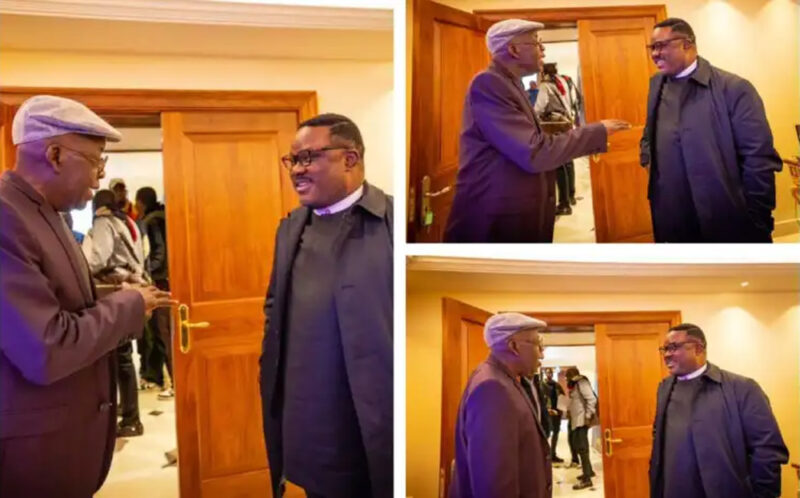 PRESIDENTIAL candidate of the All Progressives Congress, Asiwaju Bola Ahmed Tinubu, arrived the United Kingdom yesterday ahead of his planned lecture tomorrow.

He will be speaking on security, economy and foreign policy at the Chatham House.

The APC presidential candidate was accompanied on the trip by some state governors and party leaders.

The Presidential Campaign Council (PCC) of the APC had earlier announced that Tinubu will be spending 13 days on foreign trip to the United States and other European countries.

The PCC, in a statement on its Twitter account on Monday, stated that the former Lagos State governor will on December 5 speak at the Chatham House, the United Kingdom’s elite Foreign and Policy Think-tank institution, where he will dwell on security, economy and foreign policy.

Chatham House had on its official website said that Tinubu will discuss “his vision and recently unveiled manifesto for ‘renewing hope’ in Nigeria including his policy proposals for economic reform and revival and how to deliver secure and inclusive job opportunities for Nigerian citizens.”

It said “the event is part of a series of events and outputs examining Nigeria’s 2023 elections and political developments.”

Meanwhile, the Presidential Campaign Council (PCC) of the ruling All Progressives Congress (APC) yesterday accused Arise News of persistent blackmail to railroad the party’s presidential candidate, Asiwaju Bola Tinubu to its town hall meeting scheduled for today, but vowed that the candidate would not succumb to the antics.

The council in a statement by its Director, Media and Publicity, Bayo Onanuga described the continuous broadcast of Tinubu’s participation at the talk shop as “shocking and downright anomalous”, even after informing the organisers of the debate that Tinubu would not be available for the programme.

He accused the opposition of peddling the rumour.

According to Onanuga , the APC flag bearer had on  November 7 advanced seven reasons why he won’t be attending the television station-organised presidential debates in a statement by the spokesman for the campaign council, Festus Keyamo.

His words: “We find it shocking and downright anomalous that Arise News continues to broadcast the participation of All Progressives Congress presidential candidate, Asiwaju  Bola Ahmed Tinubu in its Presidential Town Hall meeting scheduled to hold on 4 December 2022 despite our earlier statement that our candidate will not be available.

“We noticed that Arise News has also been running a campaign on the so-called constitutional duty of the presidential candidates to participate in its debate  by dubiously citing Section 22 of the Constitution of Nigeria  on the obligation of the Mass Media.

“While it is trite that the media has a clear constitutional duty to hold public office holders accountable to the citizens and its role as the watchdog of the society, there is no part of the Constitution and the Section 22 that says a presidential candidate of any political party and least of all, Asiwaju Bola Ahmed Tinubu, must participate in Arise News Town Hall event or any media organised an event at all.

“We want to make it abundantly clear again that Asiwaju Tinubu will not participate and will not attend the Arise News Town Hall meeting slated for Sunday, 4 December, 2022 and any other ones it may plan before the February 2023 presidential election. We want to equally stress that Arise News has consistently shown a pattern of bias against Asiwaju Tinubu and we don’t consider the medium as credible and impartial.”

The council then disclosed that the APC presidential candidate has his schedule of campaign activities and other engagements within and outside Nigeria.

“One such is his scheduled event for Monday, December 5, 2022 at Chatham House in London where he will speak on Security, Economy and Foreign Policy.

“Asiwaju Tinubu travelled to the United Kingdom early today (Saturday) for this earlier scheduled engagement. We want to reiterate for the umpteenth time that no amount of blackmail, intimidation and media bullying and innuendos by the owner and management of Arise News will change the position our campaign has taken on this matter.”

The council asked all its spokesmen and supporters to steer clear of “this station over its consistent unprofessionalism and bias against our candidate and party.”

Dr.Orji Kalu said on his Facebook wall yesterday that speculations that Tinubu was denied US visa were untrue.

He said: “As the election draws closer, the opposition will spread more fake news against our presidential candidate but we should always ignore and keep our eyes on the ball.

“The news that Tinubu was denied visa to the USA is as fake as other fake news.

“Tinubu postponed the travel himself and was never denied visa.

“The State Department of the US confirmed to me that Tinubu will be received in the third week of December.

“As the presidential candidate of our party with outstanding personality, he will be warmly welcomed in the United States.”