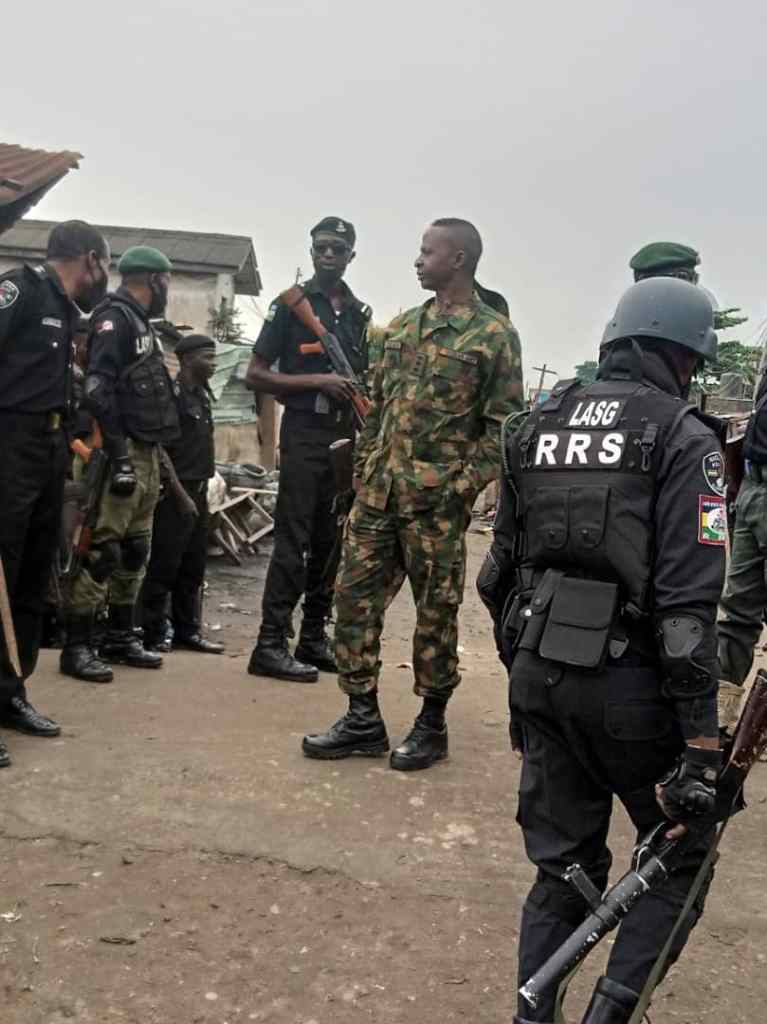 Due to its economic and socio- political importance in the country, Lagos State keeps attracting the highest migration of people from other states of the federation ,  a trend that has made it to have its fair share of security challenges. Investigation by Crime Guard has revealed that a good percentage of people who migrate to the acclaimed mega city, did not make  effort to  address accommodation issue before embarking on the journey. Majority of them, both males and females, live in the markets  and other open spaces. In the day time, they go out to hustle and retire to  places like Oshodi market, Ladipo market, Aswani, Agege market, Ojuelegba, Ijora Olopa, Ijora Badia, Ojota , among other at areas. They are also seen at railway lines, under bridges and on kerbs, at night .

Investigation has  revealed that most of them are responsible for robbery   attacks  around the areas they pass the night, . They are also responsible for the attacks on workers and traders who leave their houses between 4.30 am and 5am,  for their respective work and business places. Their targets  are also  stranded commuters  at bus-stops at night, as well as motorists who are unfortunate to have their vehicles break down at night. Arrest Last week, the Lagos State Police Command arrested two different groups of these youths. Seven members of the first group had assisted owner of a 2016 Model Sienna  to push his vehicle which was involved in a minor accident to somewhere considered safe near Charity bus- Stop, Oshodi, with a promise to come pick it the next day. Out of trust , the motorist dropped  keys of the Sienna to one of the boys , Chibuike Ekwe.

However at midnight, Ekwe, and two others , drove the car to Coconut, in Apapa area of the state , where it was  being  dismantled with the intention of selling it in parts, when luck ran against them. Ekwe, in the interview, said he had never stolen all his life. He blamed his indulgence in his inability to resist the temptation , after the idea was sold to him by one of the boys. According to him , “ After pushing the vehicle to a safe place, some of the boys said if they were the ones with the keys , they would move it immediately to the East , and sell it, since the owner  did not know me.. “ By 3am, I informed Dalinton Ohia and one other boy to accompany me to where the vehicle was parked and  I drove it to Coconut, where one man named Container, dismantled it. He said it was easier to sell it  in parts. While he was on it , some members of OPC accosted us and asked who owner of the car was. When  we could not provide a convincing answer,  Mr Container escaped, leaving me behind”. Asked where he lived and did for a living, he responded, “ I am a panel beater at Ladipo market. I hustle in the morning and sleep in the  market at night, with other boys. I have never stolen before, this is my first time”. On his part, Darlington Ohia said, “

My role was to accompany him(Ekwe) to where the vehicle was parked. He did not tell me he was going to butcher it. He only said he was going to re park it at Toyota. When we got there the guard ( Danladi) refused him from carrying the vehicle. While Danladi was discussing with me, Ekwe drove the vehicle away. We went to Toyota where he claimed he was going to park it in a well lit place , but didn’t see him”.

For Yemi Joseph,   Chinoso Isiguzo and Innocent Ikeaguru and Dalandi, they claimed to have  only assisted owner of the vehicle to push it to a safe place till the next day when he (owner ) promised to pay them for their service, only to be arrested . Unfortunate for those who claimed to be innocent , no relative had come to effect their bail, as requested by  the Police , since their arrest. Invasion For the second group of  four boys , they attacked  a driver whose vehicle broke down at Toyota bus-stops , too, last weekend. The vehicle conveying refrigerators and other electronics gadgets was  vandalized and the goods carted away. The suspects are: Somto Chukwu, 22; Chibogu Nweke, 29; Ezekiel Egbe, 29 and Chikodi John, 24. Ezikiel who claims to be a vulcanizer at Ladipo market, Mushin, explained his role. He said  , “ I had closed for the day and was going to watch foot ball match , when I saw two boys with refrigerators. They were taking them towards the canal. A friend who was with me, Sunday, said we should follow them so as to collect our share from the sale of the item, but I refused.

“ I went straight to the expressway where the boys said the vehicle conveying the goods broke down. I saw  a big size refrigerator  by the pavement  of where the truck broke down. I took the refrigerator to Oshodi, where I used to sleep . Unfortunately for me, the person who saw when I was carrying it brought policemen to the shop at Oshodi where  I sleep. “ We pay N100 to sleep there at night. We sleep at the veranda of shops at Oshodi.

Some people sleep inside the shops but their fee is higher. I only go to Ladipo to sleep if i don’t have N100 to pay for the night. I just came to Lagos from Anambra . My parents are dead and I am an only son”, he said in an emotional laden tone. Cry for help His partner in crime, Nweke, said, “ That night, driver  of the truck ran to me to help him beg some boys that invaded his truck. He said they demanded for money from him but that he had only N1000 on him.  He said the boys attacked him when he told them he had no money , collected his phone from him  and  that he had to run for his life. “ I went to meet the boys and they told me since the man was not ready to give them money, they would collect the goods. Some of them carried car battery, while others carried brand new Samsung refrigerators .

Those I saw with batteries were Chikodi and Ebere. “I followed them to the  canal  by the market where they met one aboki who told them to wait till morning before he would buy the goods. But they insisted they wanted to sell them then. At the end, aboki bought the two  brand new refrigerators for N30,000. They sold the battery for N6000 and I was given N5,000. For Chikodi John, he said he got N4000 from the sales of the stolen items. On his part, Somto,  claimed to be innocent.

He said “ I am just suffering for what I know nothing about . I was arrested because I sleep in the same place ( Ladipo market ) with them. I was sleeping when the policemen stormed the place and picked me . We sleep inside an empty container in the market” he said. Like others who claimed innocence, none  had come to secure his bail from Police  custody since his arrest. The suspects who were among those paraded by the Commissioner of Police, CO Hakeem Odumosu, would be charged to court soon, according to him.