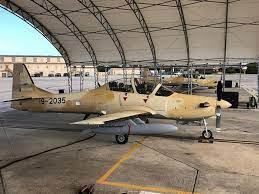 Six Super Tucano aircraft ordered by the Federal Government from the United States will be delivered in July, the Presidency has said.

Spokesman of the President, Garba Shehu, said six more of the aircraft will arrive shortly after.

Writing via his Twitter handle, Shehu said 14 Nigerian pilots are currently training in Georgia ahead of the delivery.

“The Super Tucanos came off the production line in Jacksonville Florida and are now being equipped and flight tested. Nigerian pilots and maintenance personnel are training on these planes. Currently, the construction is ongoing, which will house the aircraft,” he wrote.

“At present, five Nigerian Super Tucanos are at Moody AFB in Georgia for pilot and maintainer training. The two companies released images of the sixth aircraft, which also will be flown to Moody, in a jungle camouflage scheme.”

He quoted Sierra Nevada Corporation (SNC), the contractor involved, as saying Nigerian air force pilots will train in the aircraft before their delivery.

In 2018, President Muhammadu Buhari approved $496 million for the procurement of the aircraft to boost Nigeria’s war against Boko Haram.

The deal with the US would include supplying the Nigerian armed forces with ammunition, training and aircraft maintenance.

The Obama administration had stopped the deal following allegations of human rights abuses against the military.

However, both countries resumed talks over the deal after former US President Donald Trump overturned the embargo imposed by Obama.

He had said, “The President has done his best by ensuring that he released exorbitant funds for the procurement of weapons which are yet to be procured, they are not there. Now the president has employed new hands that might come with new ideas. I am not saying that those that have retired have stolen the funds, no. But the funds might have been used in other ways unknown to anybody at present.”

Related Topics:FeaturedTucano aircraft
Up Next