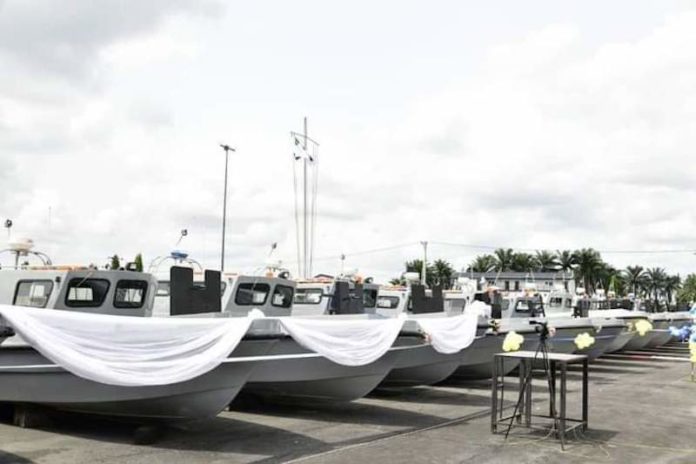 Presenting the boats to the military yesterday, at the NNS Pathfinder, Naval Base, Rumuolumeni in Obio/Akpor Local Government Area of the state, Governor Nyesom Wike lamented that the Nigeria’s economy will remain vulnerable and weak if illegal bunkering and artisanal refining of crude oil continue unabated.

He said the seeming frustration in the fight against illegal refining of crude oil is caused by security personnel who are deeply involved in the illegal activity or providing cover for the criminals.

He explained that the oil and gas sector is the mainstay of the nation’s economy and Nigerians owe it as a duty to ensure that the country’s economy is salvaged.

“All of us owe it a duty to see how we can salvage this country. 80 per cent of the revenue of this country comes from oil and if we cannot reduce or stop this illegal oil bunkering this country is in for a problem. And so, we must all work together to help this country.”

He said his administration has remained committed to the fight against illegal bunkering and achieved tremendous results leading to reduced soot and oil theft.

The governor dismissed notions in some quarters that governors put their state’s security vote in personal pockets. According to him, provision of gunboats, other equipment and logistics to the security agencies to strengthen their capacity to fight crime and criminality are evidence of how the security vote is being deplored.

Governor Wike charged the security agencies to use the gunboats to tackle the menace of sea piracy and illegal bunkering activities within the state.

Gambo, who inaugurated the gunboats, said Nigeria has exited the International Maritime Bureau global list of countries prone to piracy.

He thanked Governor Wike for the donation, and the initiative taken in waging war against artisanal refining activities which has given more impetus to the security agencies to brace up to the fight.

He said there is need to emulate Governor Wike who has mustered the political will to wage war against operators of illegal refineries, with the support of local government chairmen who have identified and destroyed bunkering sites and arrested some perpetrators.

The Managing Director of Abitto Global Services, Richard Akinaka, whose firm built the gunboats, thanked the Rivers State Government for awarding an indigenous firm the contract to build the boats.

Related Topics:BunkeringgunboatsmilitaryRiversSea Piracy
Up Next