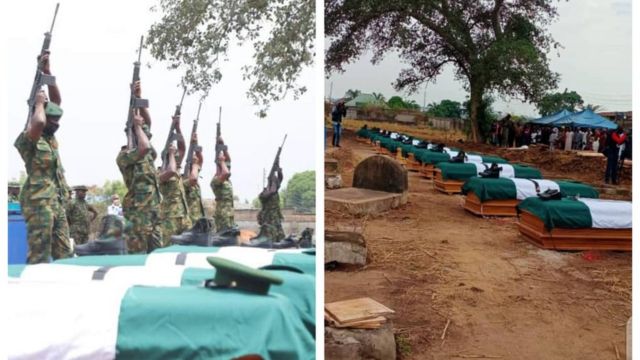 It was all tears as the 11 soldiers who were killed in the bloody Benue communal clash between Konshisha and Oju local government areas in Benue State were buried on Monday in Wurukum Military Cemetery in Makurdi, the Benue State capital.

One army officer and 10 soldiers were found dead after they went missing at Bonta Village in Konshisha Local Government Area.

Ortom, while speaking at the interment, regretted the death of the Army personnel and vowed to collaborate with security agencies to bring peace to Konshisha.

Ortom also expressed condolences with President Muhammadu Buhari, Chief of Army Staff and the leadership of the Armed Forces over the death of the soldiers, describing the incident as unfortunate.

He apologised to the families of the fallen heroes.

He vowed that the state government would collaborate with security agencies to ensure that all those who perpetrated the act would be fished out and brought to book.

He regretted the manner in which the soldiers died in the hands of the militias while trying to ensure peace in the troubled areas of the state.

“We condemn the killing of the soldiers who were out to maintain peace. Attack on security men is attack on all. The attack was uncalled for and unwarranted.

“They were out to keep peace and got killed in the process otherwise, we all know what soldiers would ordinarily do in such a situation,” he said.

Ortom appealed to the families of the deceased soldiers to forgive him for uncomplimentary comments he may have made in the course of the situation, saying he said that based on the information available to him at that time.

“If I said anything that was offensive to the families, I ask for their forgiveness. I earlier said only two soldiers were involved based on the information available to me at that time.”

The governor pledged his administration’s support for the bereaved families to enable them overcome the difficult moment.

He prayed to God to grant the deceased soldiers eternal rest.

Conducting the funeral service, Chaplain of 73 Battalion, Major Ibrahim Mavisky, as well as the Imam, Captain A.A. Bashir said there is time to be born and time to die.

They said as human beings, “we brought nothing to this world and we shall surely leave with nothing.”

They noted that the fallen heroes were peacemakers, who went out not for evil but for peace and regrettably met their death in the process.

“The slain soldiers were out to serve the nation but were cut short. We, therefore, pray for their souls and that God should grant them eternal rest,” they said.

“These people died innocently and without any offence. It is the promise of God that each of us has a stipulated time to go.

“We will all go back to God someday and explain how we live our lives. God will console the entire Nigerian Army and the immediate families they left behind.

“The slain soldiers were out to serve the nation, but their lives were cut short. We, therefore, pray for their souls and that God should grant them eternal rest,” they said.

After the traditional gun salutes, the bodies of the captain and 11 soldiers were committed to mother earth in the presence of the Governor, Commander of Operation Whirl Stroke OPWS, Maj. Gen. Adeyemi Yekini, the Commanding Officer, 72 Battalion, military personnel as well as family members of the deceased soldiers.

However, following the killing of army personnel, the military has raided neighbouring villages of Bonta in search of the militias and to recover the weapons of the killed soldiers.