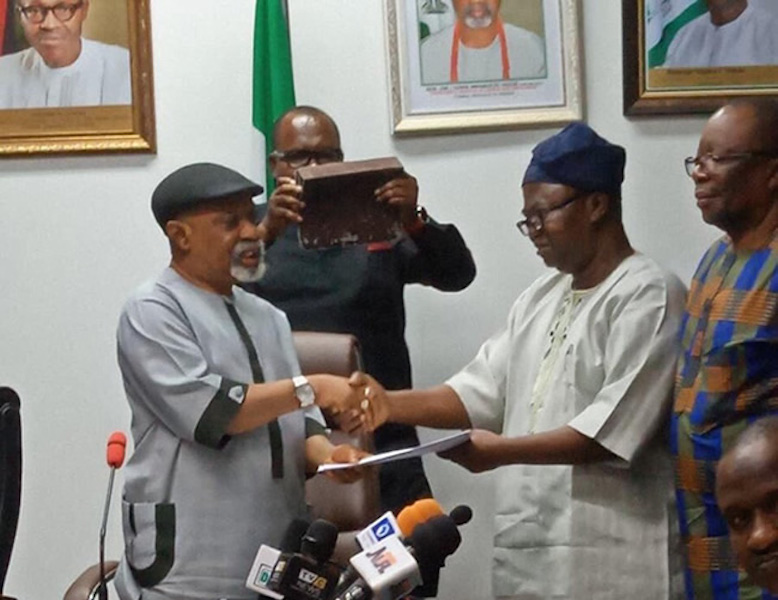 The Academic Staff Union of Universities (ASUU) that may soon call off its over eight-month industrial action after the Federal Government has agreed to exempt its members from the Integrated Payroll and Personnel Information System (IPPIS).

Government has scheduled another meeting with the organised labour on Sunday to review the working agreement on issues relating to the Downstream Sector of the Petroleum industry and electricity tariff.

The meeting with labour will take place at the Presidential Villa in Abuja.

At Friday’s meeting with ASUU, the federal government’s side shifted ground on a number of issues, including the insistence that all the academic staff of federal universities must be paid through IPPIS.

With the resolution of the dispute on IPPIS, which appeared to be a major stumbling block to the conclusion of negotiations by both parties, the coast is now clear for ASUU to suspend its industrial action.

Minister of Labour and Employment, Senator Chris Ngige however said that ASUU is expected to go and relay the latest proposals to its organs and revert to government so that the universities can reopen next week.

While reading out the communiqué at the end of the grilling seven-hour negotiations at the conference hall of the Federal Ministry of Education, Ngige said government had agreed to ASUU’s demand to pay their members salary arrears from February to June using the old salary payment platform, GIFIMS.

In a reconciliatory move, the government also accepted to wave the threat of “no work, no pay” and approve payment of salary arrears to the striking lecturers.

Ngige said, “The meeting agreed that the Federal Ministry of Education and that of Labour and Employment will look into the issue of “No work, No pay” as stipulated in Section 43 of the Trade Union Disputes Act, Cap 18 laws of the Federation of Nigeria, 2004 with a view to getting approval for the withheld salaries to be paid.

“It was also agreed that the mode of payment of those that had not been captured on the IPPIS platform between the months of February and June, 2020 be adopted for the purpose of payment during this transition period.”

In addition, the minister said that the meeting agreed that a suitable template to address all the anomalies identified in the previous processes should be handled by the Accountant General of the Federation, the Executive Secretary of the National University Commission and Vice Chancellors of universities.

It said that Vice Chancellors are to submit details of Earned Academic Allowances and Earned Allowances to the NUC before November 30.

On the reconstitution of the federal government’s negotiating team for the 2009 agreement, Ngige said both were satisfied with the progress so far made, adding that letters have been issued to members of the renegotiation team.

He added that the meeting agreed the inauguration of the university visitation panels will be carried out as soon as the institutions reopened, while awaiting gazetting.

On his part, ASUU President, Prof. Biodun Ogunyemi said that the union has received the new proposals by the federal government and that it would go and consult with its organs before taking a position.

“I don’t really have much to say as the minister had said it all. Government has given us offers and we have promised to go back to our organs to brief them and then come back to government. We acknowledge that progress has been made,” he said.

Ogunyemi said that ASUU would need till Friday next week to meet with its organs before reverting to government. The meeting was therefore adjourned till next week Friday.